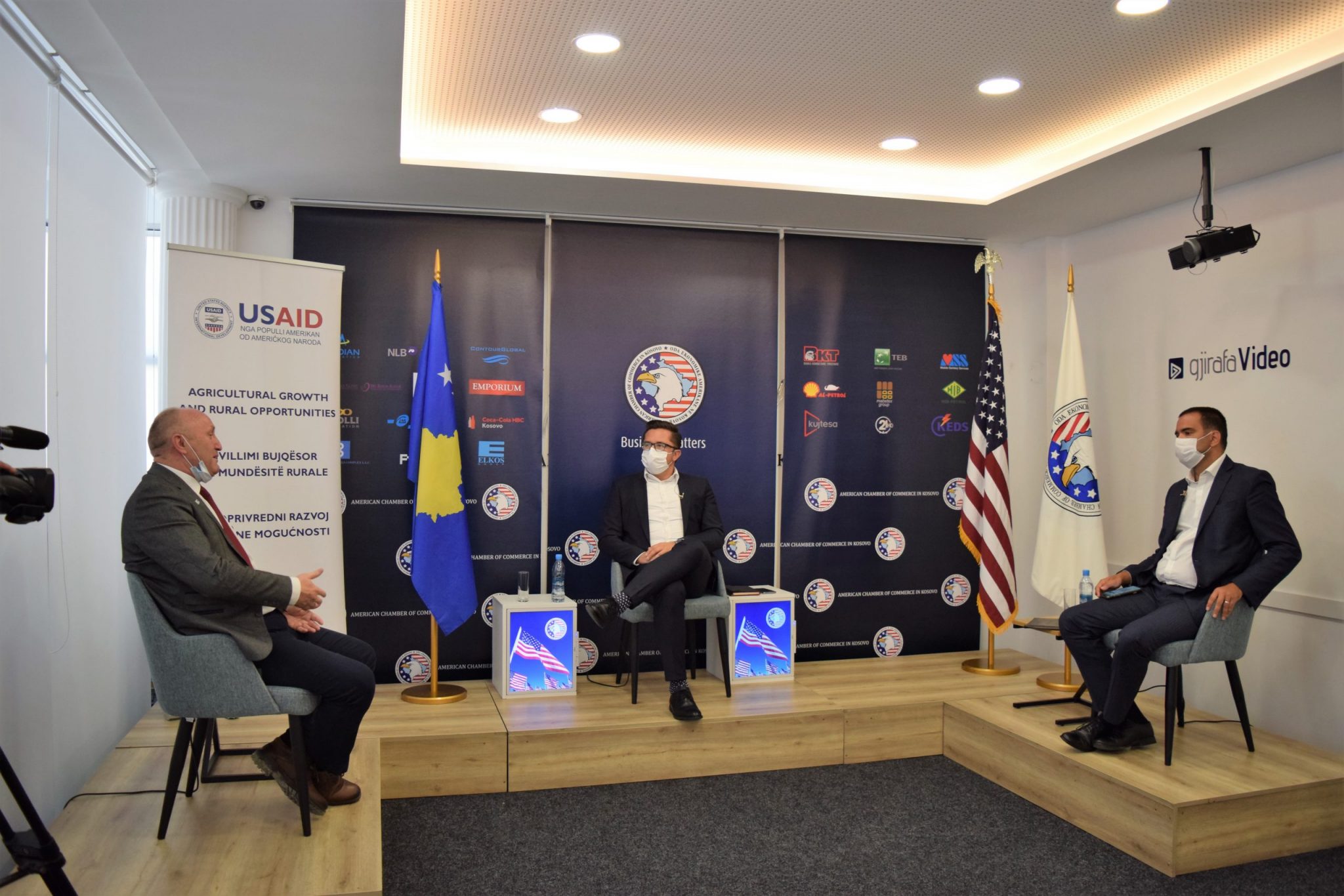 Prishtina, August 27, 2020 – The American Chamber of Commerce in Kosovo organized a virtual forum with the Minister of Agriculture Besian Mustafa, where the power of agriculture to drive the economy was discussed. This forum was funded by USAID Agricultural Growth and Rural Opportunities Program (AGRO).

Minister of Agriculture Besian Mustafa, emphasized that the ministry he leads is currently implementing two programs that provide financial support and liquidity to agribusinesses through grants or subsidies, which aim to promote the development of the agricultural sector and the country’s economy. He pointed out that the biggest challenges that agri-producers are facing during the COVID-19 pandemic come from the decline in sales of agricultural products, but nevertheless he expressed his satisfaction that this sector has increased its exports to international markets during this period. According to the Minister, in order to ensure that agriculture will have continuous development, in addition to doubling the budget for subsidies, investments are being made in irrigation. He stressed that through a cooperation agreement with the World Bank, an investment in creating a master plan of the irrigation network which according to him will identify agricultural areas that need irrigation is nearing completion. Further, the Minister spoke about the plans for the creation of a 7-year strategy for the development of agriculture, where he added that one of the priorities within this strategy is creating funds for agricultural security, taking into account destructions caused by climatic conditions. Finally, he added that the agricultural sector has great potential and a positive impact on Kosovo’s recovery and economic development.

Fatmir Selimi, the Chief of Party at USAID AGRO Program, stressed the importance of agriculture in Kosovo’s economy, citing the positive impacts this sector has. Selimi emphasized that the approach of the program he leads focuses on the introduction of new agricultural technologies, strengthening of relations with strategic partners and increasing of the consumer trust of local, regional, and international consumers in Kosovar products. He mentioned that the Government of Kosovo has allocated a fund of three million euros for subsidies, through which it aims to increase farmers’ trust in state institutions, create better conditions for doing business, and promote local products within the country. According to him, it is imperative to increase awareness about the importance of the agricultural sector as well as to encourage the Kosovar youth to become part of it, because agriculture has great potential for development.

Mark Wood, Senior Advisor at USAID AGRO Program, spoke of the achievements and radical transformation that agriculture in Kosovo has had over the last decade thanks to the contribution of various international projects such as that of the United States Agency for International Development (USAID). According to him, among these achievements is the provision of seeds and fertilizer for the development of agricultural practices, as well as the increasing of the level of knowledge regarding the modern standards of agriculture, which among other things has changed the mentality of farmers about their work and material gains from agriculture. Wood pointed out that the change in the negative outlook on agriculture as a low-income sector has paved the way to increasing the quality of domestic products, which has affected their penetration in foreign markets. He expressed his satisfaction that with these radical changes international markets are now turning to Kosovo to meet their needs for the products this sector offers. According to him, the Government must focus on supporting farmers and strategic partners in order to promote the image of Kosovo as a country with great potential and high-quality agricultural products.