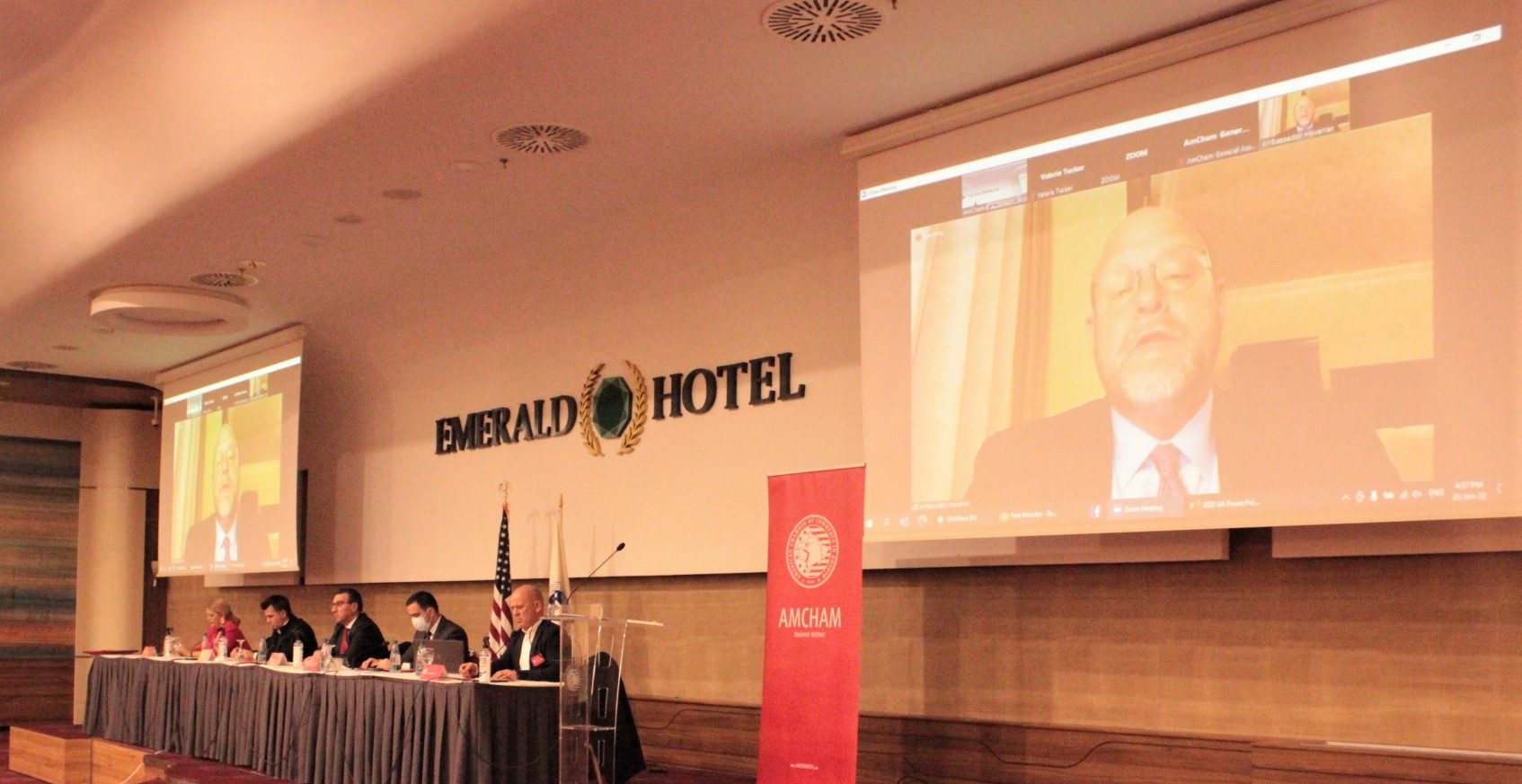 Pristina, January 20, 2022- Strengthening and deepening our economic ties and commercial relations, which will result in greater prosperity for Americans and Kosovans is among the highest priorities of the new U.S. Ambassador in Kosovo, Jeff Hovenier.

Speaking at the Annual Meeting of the General Assembly, Ambassador Hovenier said that 2021 was a good year for the Kosovo economy and that the private sector is the key driver of economic growth. He emphasized the importance of a dynamic and vibrant private sector, as well as the need to strengthen dialogue with the business community, and to leverage the investment power of the diaspora.

“One of our Embassy’s top priorities is supporting Kosovo’s European and Euro-Atlantic trajectory.  Kosovo is a small market on its own, but it has the potential to be a hub for trade and investment in southeast Europe,” said Ambassador Hovenier, adding that the U.S. Embassy supports initiatives that create more efficient cross-border trade and lead to a more competitive and inclusive Kosovan economy.

In addition, the U.S. Ambassador said that while the public sector is great at achieving many goals, it is important to step away from certain sectors of the economy and let the private sector do what it does best.

Lastly, Ambassador Hovenier called upon the companies in Kosovo to promote and enforce mitigation measures like masks, social distancing, and vaccination among their staff and customers, as the Omicron variant is present and spreading rapidly in Kosovo.

The outgoing President of the Board of Governors of AmCham Kosovo Ilir Ibrahimi expressed his gratitude to all the members, the U.S. Embassy, and the Executive Director and his team for the continuous support and cooperation throughout the years. Ibrahimi said that despite the frequent changes in the Government, AmCham remained firm on its position by always offering to be a partner with every government, but never compromise in advocating and fighting for its members. He also said that with its 210 members, AmCham proudly enjoys the reputation of a professional and strong business association.

The Executive Director of AmCham Kosovo Arian Zeka said that over the last decade, the organization has grown over three times in terms of membership, finances and staff, adding that the more powerful it became over the years the more it understood that it is vitally important to remain true to the values and principles of U.S. Chamber of Commerce as well as to the individual values that everyone at AmCham represents. He thanked the outgoing Board members for their guidance and oversight, the staff of AmCham for their hard work, the U.S. Embassy for their support and Kosovo’s institutions for their partnership.

The 140 delegates of the General Assembly of the American Chamber of Commerce in Kosovo elected the new Board of Governors and approved the 2022 Annual Program and the Supporting Budget. For the first time in the eighteen-year existence of AmCham Kosovo, Afrore Rudi from Deloitte is elected as the first female President of the Board of Governors.