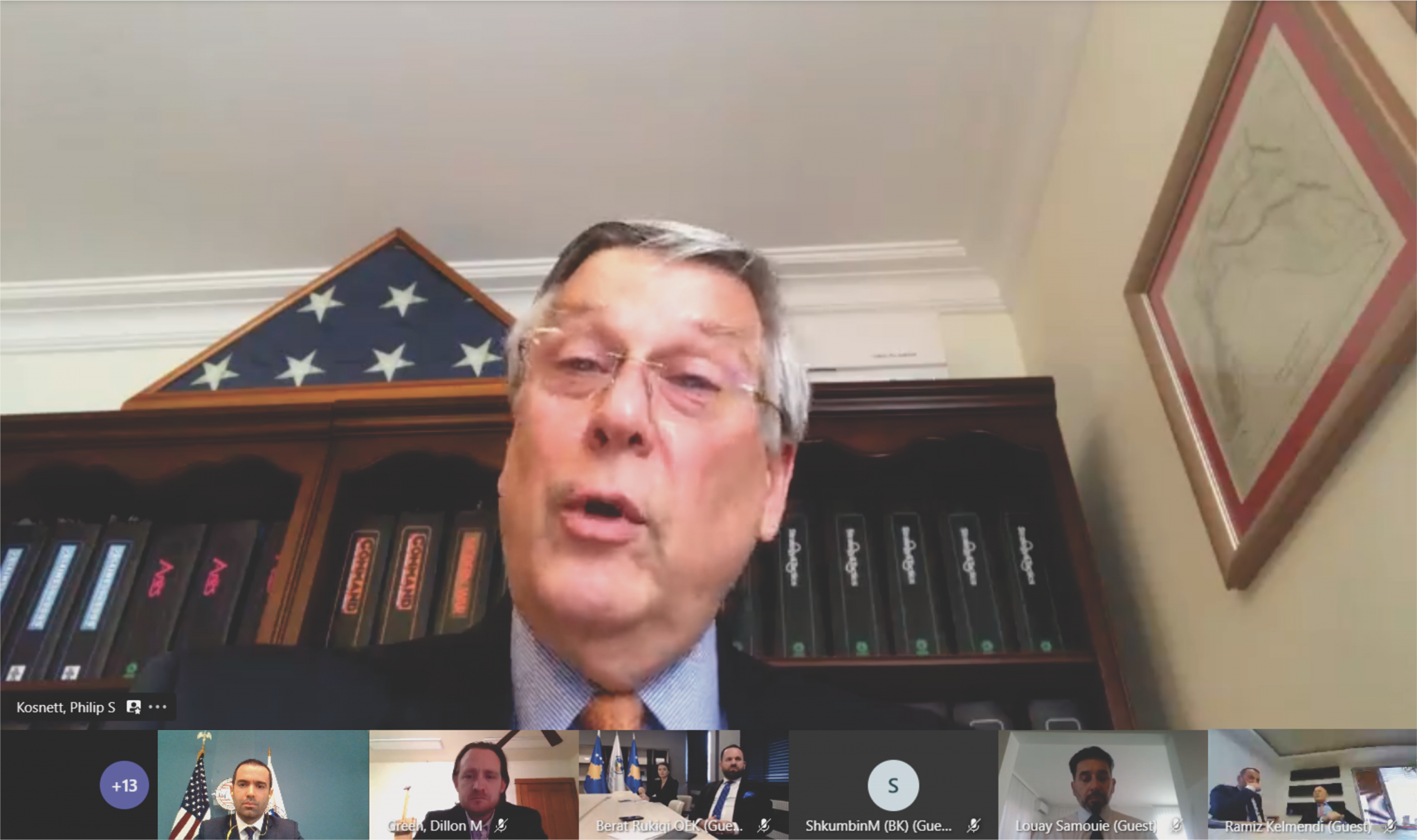 Prishtina, November 25, 2020 – Through a virtual meeting organized by the American Chamber of Commerce in Kosovo and Kosovo Chamber of Commerce, business representatives from both chambers had the opportunity to virtually meet with His Excellency Philip Kosnett, U.S. Ambassador to Kosovo, as well as the Managing Director of the U.S. International Development Finance Corporation (DFC) for Western Balkans, John Jovanovic, to discuss the economic prospects of the U.S.-brokered Economic Normalization Agreement, signed by Kosovo and Serbia in Washington, D.C. on September 4th.

U.S. Ambassador to Kosovo Philip Kosnett said that he was pleased to see the two chambers working together on promoting the benefits of economic normalization, adding that it is critical that U.S. Government has a strong partnership with the business community in Kosovo.

“Something that we all share is the desire to see Kosovo and the region become more peaceful, more prosperous, and we cannot do that without private sector involvement,” Ambassador Kosnett said, adding that a key element of U.S. policy in the last couple of years has been to recognize the need for economic initiatives that will help ordinary citizens to build a better future for themselves.

Ambassador Kosnett further said that the support for Kosovo’s prosperity, rule of law, and peace with its neighbors are key bipartisan strategical aspects in USA, adding that Kosovo businesses and people understand that America’s economic assistance to Kosovo has always been focused on building Kosovo’s self-sufficiency, enabling the country to its own path into the future.

Ambassador explained that the U.S. Embassy and its partners in Washington are continuing to move full speed to support Kosovo and Serbia in implementing the Washington agreements, having in mind that improving the lives of ordinary citizens is critical to building the economy of the region is one of the reasons why the agreement focuses so much on modernizing the infrastructure, as it facilitates the flow of people and goods across borders and that’s really key to unlocking the potential of this region.

“If you look at the map of the Balkans, Kosovo is right in the middle of the map. Kosovo’s neighbors need Kosovo as much as Kosovo needs its neighbors to build a regional economy and to build regional pipeline infrastructure,” said Ambassador Kosnett, concluding that it is important for Kosovo to overcome its reservations about CEFTA, about Mini-Schengen and work with its regional partners.

John Jovanovic, Managing Director of the U.S. International Development Finance Corporation (DFC) for Western Balkans and Aegean stated that the core part of DFC’s objective in the region is to broaden the financial tools that are already available to Kosovo, so as to strengthen its economy by mobilizing more private investment by global capital markets.

“As far as our regional development goals – they really focus on combating brain drain and doing so by offering young people compelling economic opportunity to stay, succeed and thrive in the region,” stated Jovanovic, adding that DFC also focuses on helping to build a more sustainable regional energy and telecommunications landscape, as well as improving the overall regional economic cooperation, which would result in accelerating the economic growth of the region.

The Executive Director of the American Chamber of Commerce in Kosovo Arian Zeka said that AmCham welcomed the U.S. mediated, agreement on economic normalization, believing that it will unleash new opportunities for economic development for Kosovo and Serbia and the entire Western Balkans region, by improving mutual economic exchange, providing new sources of financing and better utilization of joint natural resources. He highlighted the importance of the opening of new funding opportunities from DFC and EXIM Bank for the development of transportation infrastructure, but also for facilitating access to finance for small and medium enterprises, as well as women entrepreneurs. And finally, he supported Kosovo’s decision to join the four-freedom initiative or the “mini-Schengen” zone, which will guarantee the mobility of businesses and professionals.

The President of Kosovo Chamber of Commerce, Berat Rukiqi, stated there is a concrete involvement of the private sector of both Kosovo and Serbia regarding this agreement, and we would like to use this as a good momentum to advance regional economic cooperation. Rukiqi also noted that together with the Executive Director of AmCham, they have been in D.C. to follow up especially for the private sector part of the agreement, and also to extensively discuss the financial instruments that DFC and other important financial institutions have at their disposal. According to Rukiqi, there are many barriers and issues that should be addressed, and the implementation of certain elements and provisions of this agreement will help not only in addressing issues between Kosovo and Serbia, but also different issues that are negatively impacting the economic development of the region.