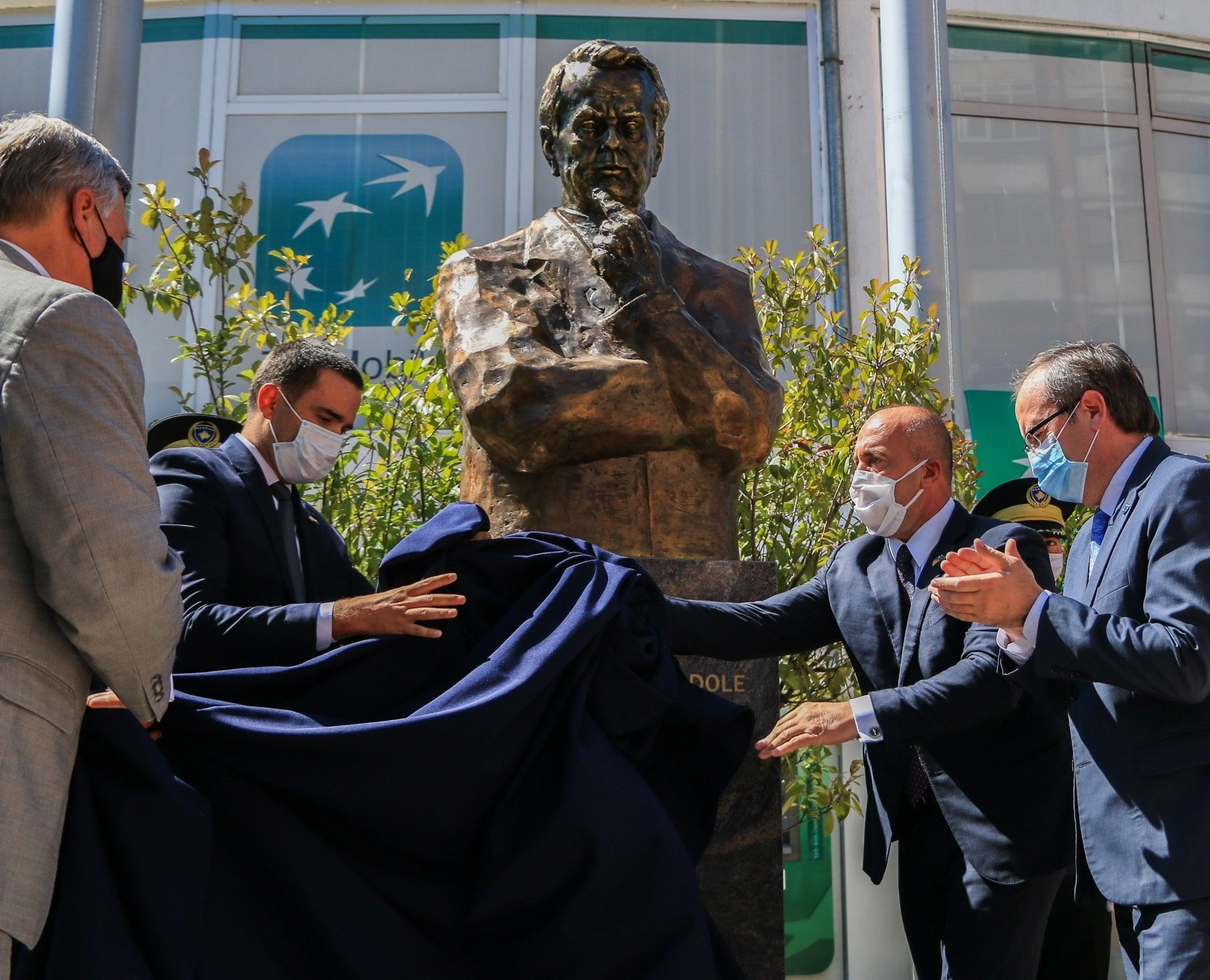 Prishtina, August 30, 2020 – The American Chamber of Commerce in Kosovo and the Government of the Republic of Kosovo organized the unveiling ceremony for the statue of the friend of all Albanians, former U.S. Senator Bob Dole, as a token of gratitude for his tireless efforts and his significant role in the freedom and independence of Kosovo. This statue, sculpted with the utmost dedication by the sculptor Luan Mulliqi, and co-financed by AmCham, its members and the Government of Kosovo is a gift for the citizens of Prishtina and Kosovo, but above all is a symbol of Kosovo’s past, and its achievements through these three decades.

During this ceremony, Senator Bob Dole addressed the people of Kosovo through a video message, in which he extended his deepest gratitude for the dedication of the statue, adding that Kosovo and the U.S. have worked together for 30 years towards making Kosovo a strong and democratic state, while noting that he hopes Kosovo will continue to become stronger and stronger over the years.

AmCham Executive Director, Arian Zeka, stressed that it is a special honor for AmCham to be part of this activity, through which the appreciation for the hard work and contribution of former Senator Bob Dole as a special hero in Kosovo is expressed. He stated that the echo of the visit of Senator Dole and six other senators in Kosovo thirty years ago have given another direction to Kosovo’s journey towards freedom, independence, and the opening of opportunities for the creation of a democratic state.

“The statue is a reminder of responsibility for us and the future generations succeeding us, to reminisce and acknowledge the United States of America on their continuous role in the process of Kosovo state creation and strengthening” stated Zeka.

The Prime Minister of the Republic of Kosovo, Avdullah Hoti, expressed that he feels honored to be part of this historical moment. PM Hoti stated that former senator Dole’s efforts for Kosovo have served as a cornerstone of establishing the statehood of the country, while considering that the placement of the statue will be a reference point for future generations to learn the history of the building of the friendship between the people of Kosovo and America.

“Senator Bob Dole is one of the first senior officials to have visited Kosovo and President Rugova during the most difficult times, when the cornerstone of the state of Kosovo and the eternal friendship with the United States of America and Kosovo was laid” said Prime Minister Hoti.

U.S. Ambassador to Kosovo, His Excellency Philip Kosnett, emphasized that it is an amazing privilege for him to be part of this memorable historic occasion. While thanking those who have made this day possible, Ambassador Kosnett stated that with the establishment of this statue the life of an American hero and stalwart friend of Kosovo is being marked. Ambassador also highlighted that Bob Dole has been a leader in promoting the cause of freedom throughout the world, and that his visit thirty years ago opened the eyes of the international community to the ongoing human rights abuses occurring in Kosovo.

“Today, we celebrate the life of a leader whose personal courage and dedication to the cause of freedom have long inspired the people of the United States and Kosovo, and friends around the world” said Ambassador Kosnett.

In addition to the American Chamber of Commerce and the Government of Kosovo, Kosovar companies KIVO, Tregtia, Meridian Corporation, ELKOS, Devolli Corporation, Mabetex, Emona, Al-Petrol, NLB Banka, Al Trade Center and the American Clinic have also contributed to the building of the statue.