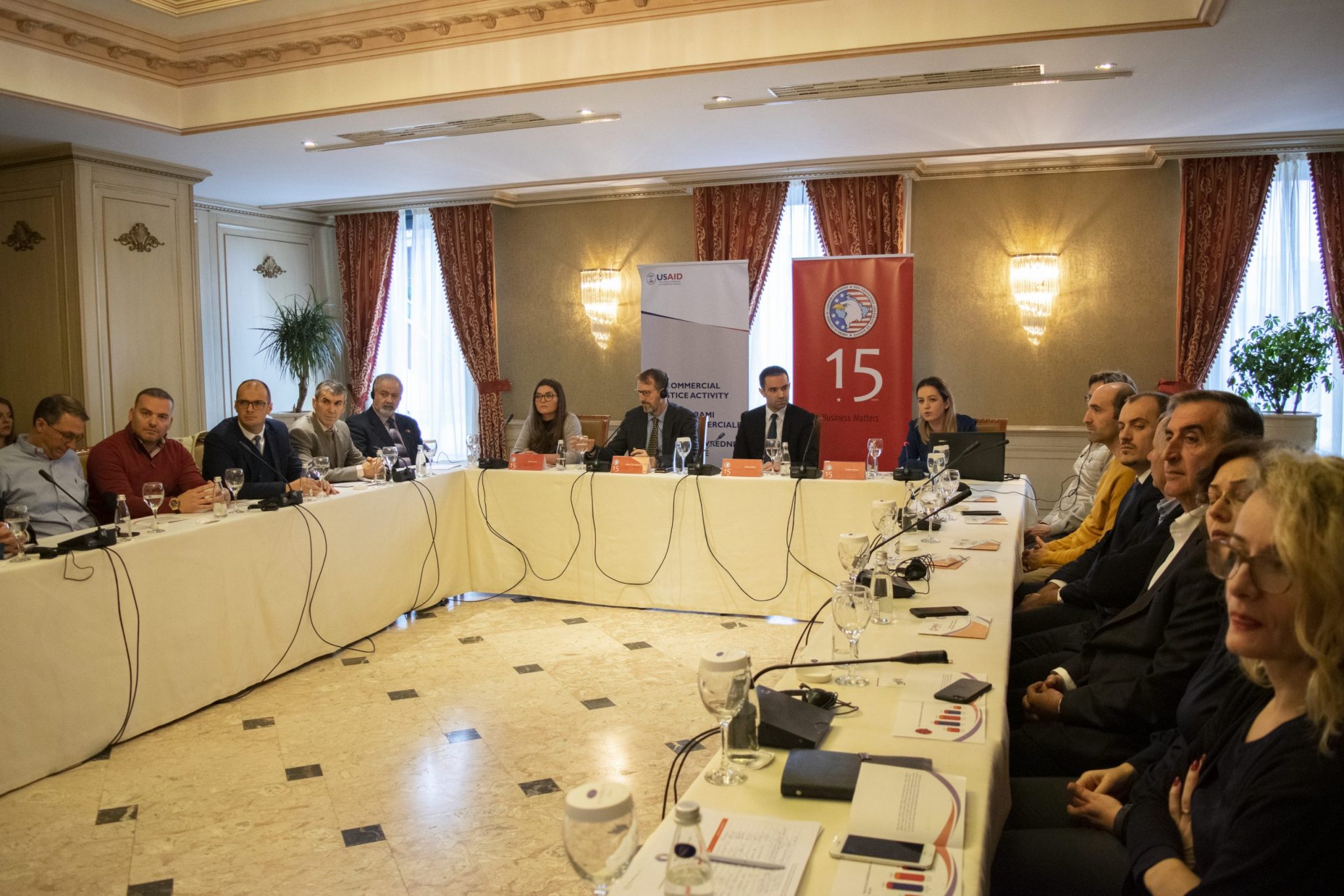 Prishtine, December 9, 2019 – Corruption continues to be one of the key problems that businesses in Kosovo face, therefore, in order to increase its reporting, state institutions should develop continuous dialogue with businesses, thus showing greater efforts on fighting corruption, and gaining the trust of the business community. This was concluded during the presentation of the findings of the Corruption Perception Study, conducted jointly by the American Chamber of Commerce in Kosovo and USAID Commercial Justice Activity Program, during the International Anti-Corruption Day.

Chris Thompson, Chief of Party of the USAID-funded Commercial Justice Activity Program, while briefing the participants on the purpose of the program, stated that the main goal of the Commercial Justice Activity is to reduce opportunities for corruption and to improve the perception of corruption among businesses and citizens. The program intends to achieve this by supporting technical reforms such as the establishment of a commercial court, increasing accountability and professionalism of Kosovo’s private judgment enforcement system, as well as by raising awareness of dispute resolution outside the court system through arbitration and mediation. Furthermore, Thompson added that the study on Corruption Perception among Businesses plays a significant role in assisting the Commercial Justice Activity because the outcomes of this study will help inform the program how to carry out its work and what it emphasizes as a priority.

The Executive Director of the American Chamber of Commerce in Kosovo, Arian Zeka, stated that this study, despite revealing findings that should be viewed with concern by the society, is also an important document that enables the measurement of the annual progress or regress in fighting corruption. According to him, the high degree of corruption and the continuing reluctance of businesses to report it to the relevant authorities are the main worrying factors. Zeka stated that the high level of corruption inevitably affects foreign direct investment and Kosovo’s institutions should continue to work on fighting corruption, or else, any battle in the efforts to attract FDI will be lost.

AmCham Policy Officer, Ardita Hajra, and the Monitoring, Evaluation & Learning Specialist at the USAID Commercial Justice Program, Nertila Latifi, presented the main findings of the Corruption Perception Study. According to the study, which is published for the second year in a row, 72% of business respondents consider corruption as a matter that requires priority action, of which 47% of the respondents perceive it as systemic, while 33% of them perceive it as sporadic. This year’s study highlights a decline in the percentage of those who have faced corruption, as well as a slight increase in those who have reported it to the relevant authorities, even though this percentage still remains below a quarter of the respondents.

The main reasons that impede businesses from reporting corruption cases include fear of retaliation by relevant institutions in the future, lack of trust in the judicial system, and lack of concrete results from fighting corruption. It should be noted that only 14% of businesses have declared full trust in the judiciary system. The study also finds that 42% of businesses believe that corruption has increased compared to five years ago, with a double increase in this indicator compared to last year’s study. While the most prevalent forms of corruption are bribery, misuse of public wealth, and non-disclosure of conflict of interest.

Listing the three main reasons that incentivize businesses to engage in corruption, nearly half of respondents stated that they do so to avoid a penalty, followed by a large percentage of those who believe that the desire to obtain a favorable treatment in an open or competitive procedure encourages businesses to engage in corruptive affairs. Two-thirds of respondents conveyed that the weak rule of law also encourages corruption.

Approximately 83.20% of respondents stated that corruption impedes foreign direct investment in Kosovo. While stating that corruption is highly present in public procurement activities, 91% of businesses surveyed believe that e-procurement will help fight corruption, which is a very encouraging finding.

The American Chamber of Commerce in Kosovo will continue to publish the Corruption Perception Study in the following years, aiming to measure the results of the efforts in fighting corruption.