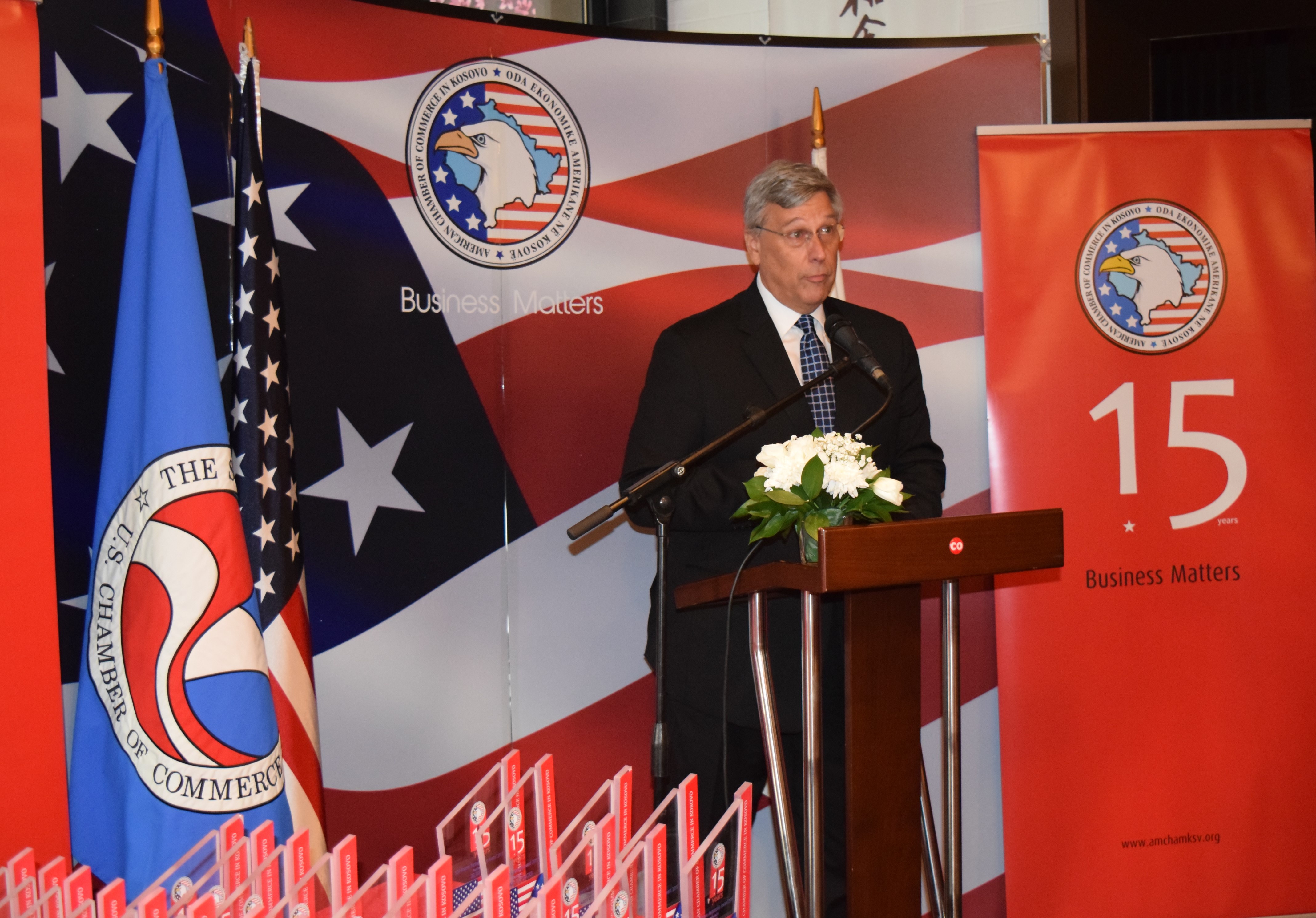 Prishtina, July 31, 2019 – The American Chamber of Commerce in Kosovo recognized AmCham member companies with the USA-Kosovo Partnership Award, companies that have contributed to strengthening economic relations between the U.S. and Kosovo.

U.S. Ambassador in Kosovo, Philip S. Kosnett, said that one of the duties of any American Ambassador is to help American businesses expand globally and this is crucial for the U.S. because it creates jobs and prosperity at home and grants quality products in the market and ensures sustainable growth. Ambassador Kosnett said that the U.S. government is committed to support not only American businesses but also people in Kosovo, the business community, and the government to build prosperity in the country.

As part of his remarks Ambassador Kosnett said, “Right now, growth is hovering around 4%.  That may sound impressive, but Kosovo produces per capita only about a tenth of the European average. That means that in order to catch up with growth in Europe, Kosovo’s economy must grow 8 percent a year for the next 30 years.  Kosovo needs private-sector expansion to meet that goal, and the government needs to get serious about supporting the private sector. It is important that whatever the shape of Kosovo’s next government, that next government must be committed to concrete action to increase the flexibility and competitiveness of Kosovo’s private sector. For business to thrive, the government must decrease corruption and promote professional standards in government, business, and education.”

AmCham Executive Director, Arian Zeka, said that it is a positive factor the ever-increasing presence of U.S. brands and companies in Kosovo, which is also a call being answered for AmCham.

“We are gathered to recognize member companies which are contributing to stronger economic bonds between United States and Kosovo, and also for their contribution to Kosovo’s economic growth, technology transfer, creating jobs and giving hope for its people,” said Zeka.

President of AmCham Board of Governors, Ilir Ibrahimi, said that Kosovo and the U.S. have relations in many areas but economic relations are the best and the strongest. Therefore, Brahimi added that the mission of AmCham for this year and the upcoming years is to strengthen the relations between Kosovo and the U.S., and businesses are the ones that make this possible.

We thank KFC and Sushico for their support for this event.