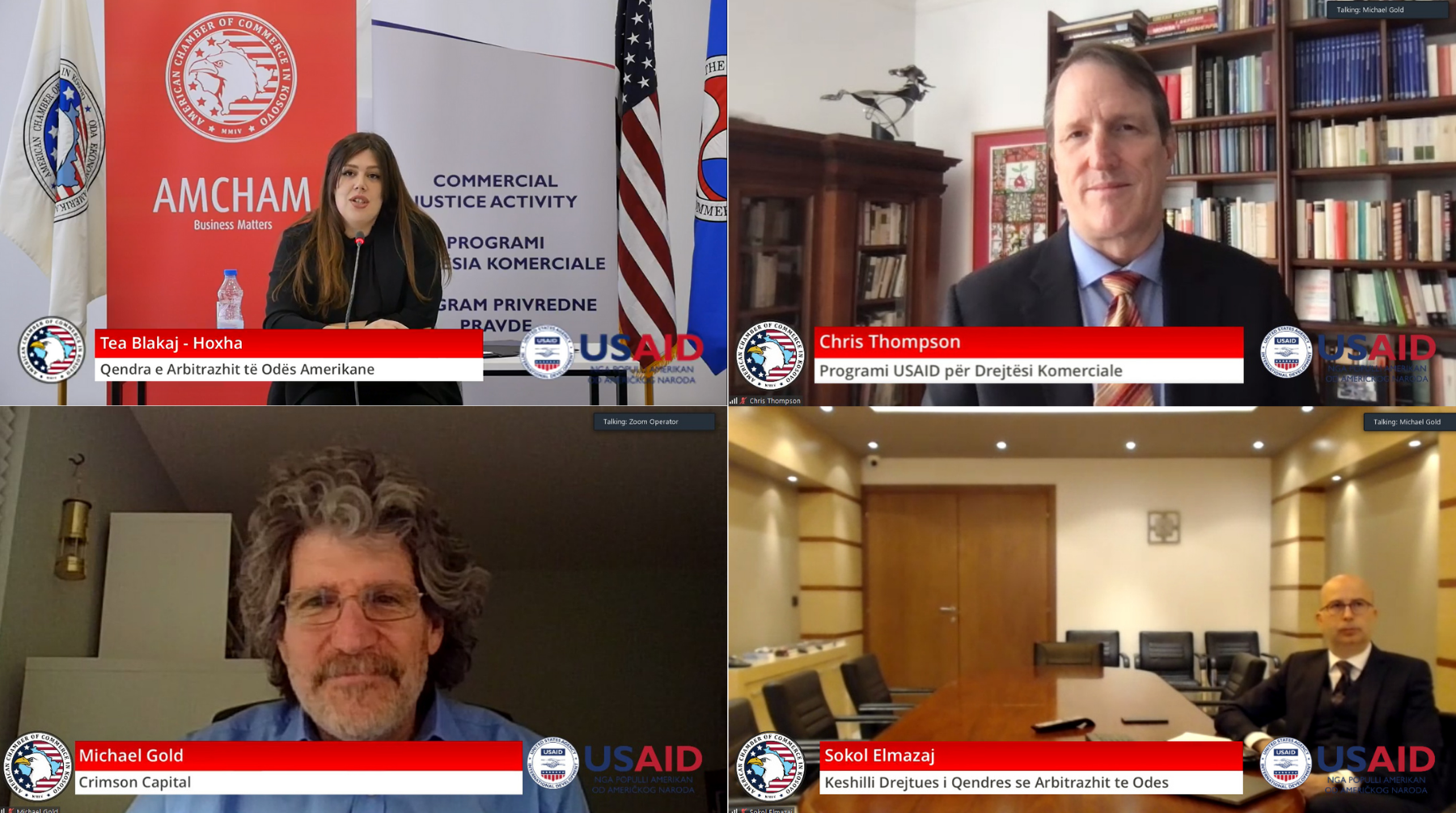 Prishtina, April 1, 2021 – During the third day of Arbitration Week, an activity organized by the American Chamber of Commerce in Kosovo in cooperation with the United States Agency for International Development (USAID) Commercial Justice Activity, the topic of arbitration in developing countries was discussed. A very fruitful discussion on this process took place with panelists from the local and international arbitration community, during which the benefits of arbitration in general as an alternative method for resolving disputes in developing countries, which are commonly dealing with a weak rule of law, were especially discussed.

This discussion was moderated by the Secretary General of AmCham Arbitration Center, Tea Blakaj-Hoxha, who among other things mentioned that the courts in Kosovo are very functional in recognizing arbitral awards, and the judges of the Department of Economic Affairs are very familiar with arbitration.

Part of the panel for this discussion was the Chief of Party of USAID Commercial Justice Activity, who called on those watching the event to be curios about arbitration and to research on the benefits it has compared to the court, as well as to include the arbitration clause in their contracts as much as possible. Thompson noted the overall support USAID offers for improving the rule of low for economies in transition, while also mentioning the different activities of the activitz he leads in Kosovo, in support of the development of commercial justice. He stated that the usage of arbitration is very important, since it is a cost effective method, much faster than the court.

Another speaker in this panel was Michael Gold, Managing Director at Crimson Capital, committed to supporting alternative dispute resolution methods in several developing countries in Europe, Africa and Latin America, who said that arbitration is a very effective method of resolving disputes quickly and definitively. Gold emphasized that he himself has been a user of arbitration in Kosovo, and described it as a very efficient and reliable process. Speaking about his experience with other developing countries regarding arbitration, Gold noted that he has encountered resistance from judges to accept arbitration, as they have believed that this process will reduce their authority. However, according to Gold, this is not the case, because arbitration only facilitates the work of courts which are usually overburdened.

Whereas, for a local perspective, panelist Sokol Elmazaj, attorney and chairperson of the Steering Council of AmCham Arbitration Center, stated that in order to guarantee a smooth running of this center, the steering council takes care of electing the best arbitrators, so that they are professionals, with wide experience in the field they operate, as well as people with integrity. Elmazaj considered that compared to Albania, Kosovo is much more advanced in terms of arbitration, while also noting that attorneys play a crucial role in promoting arbitration and recommending it to relevant stakeholders.