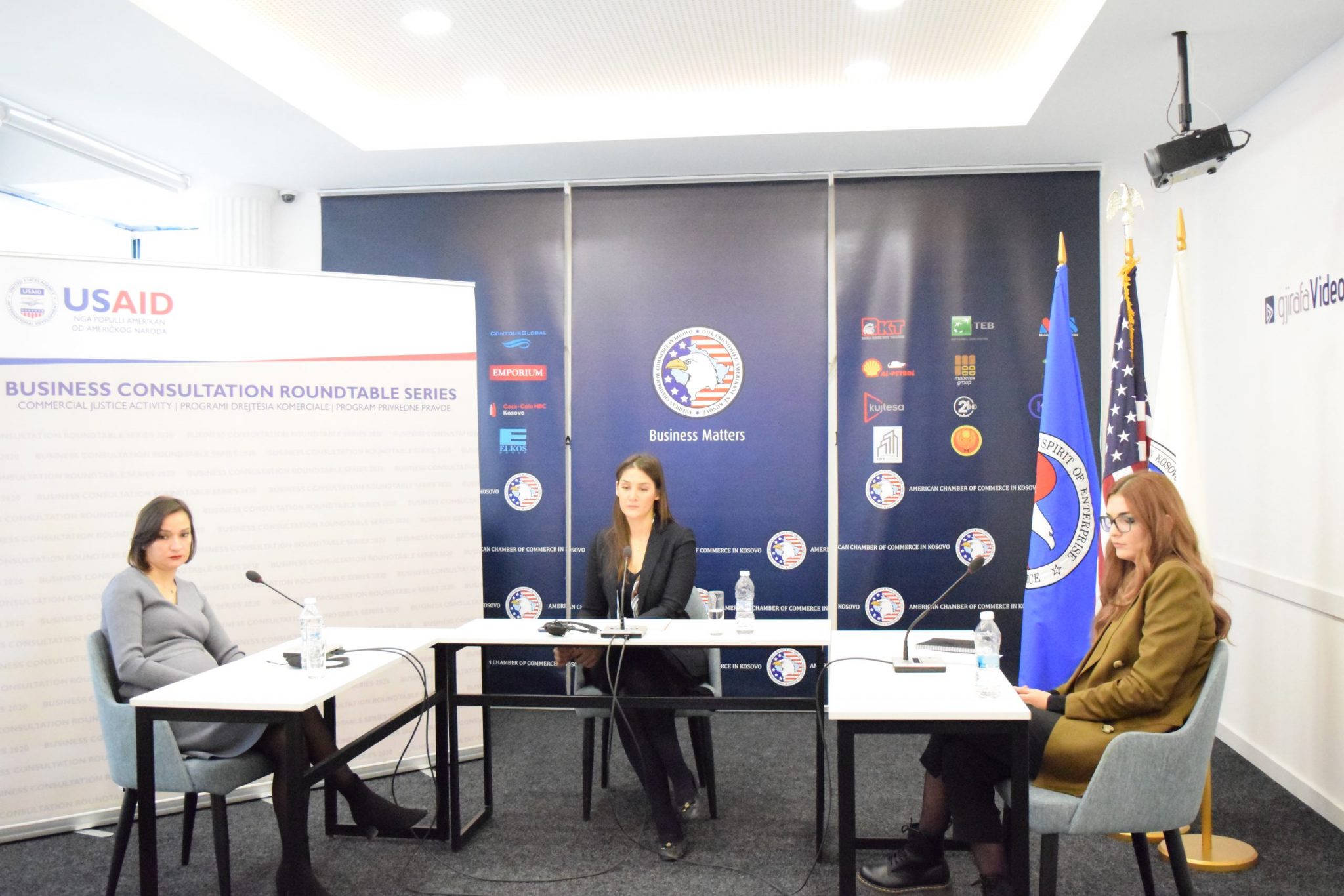 December 17, 2020 – Arbitration in the financial sector was the topic of discussion in the next virtual forum organized by the American Chamber of Commerce in Kosovo in cooperation with the United States Agency for International Development (USAID) Commercial Justice Program, as part of the activity “Commercial Justice Days: Arbitration in Focus”.

Rea Kryeziu, Senior Legal Specialist at ProCredit Bank, and at the same time moderator of this virtual forum noted that the complexity of the cases in the financial sector is one of the main reasons why there is an increase in arbitration cases worldwide, while stating that maybe in Kosovo more efforts for its promoting are needed considering the reluctance of jurists to direct parties to arbitration, due to a negative connotation that arbitration has had in the investment aspect. She noted that one of the main benefits of this process is that there is no hesitation for recognition of decisions, which is why it is very advantageous, especially for the financial sector.

Njomëza Zenjullahu, Senior Legal Advisor at USAID Commercial Justice Program and Arbitrator at  AmCham Arbitration Center, stressed that the project in which she is engaged aims, among other things, to promote and develop arbitration. Zejnullahu said that there are many advantages of arbitration in the financial sector, however, three elements are key to recommending this process within this sector. The first one, according to Zejnullahu, is the recognition of court decisions, since most banks in the country have international reach, and often the recognition and judicial execution of a decision from one state to another is problematic, while through arbitration this works very well for signatory states of the New York convention. The second one, according to her, is the complexity of transactions, which especially in the banking sector are very specific, while the availability of arbitration to engage arbitrators who have expertise in the financial sector is a very big advantage. Whereas, the third issue has to do with confidentiality, since it is more sensitive in the financial sector, and arbitration treats it carefully unlike court proceedings where hearings are public.

Michael Gold, Managing Director at Crimson Capital financial institution, said that based on his experience in various countries, he considers arbitration to be a very effective process, especially from the point of view of financial institutions that have the ability to collect debt faster. Gold stressed that specifically in Kosovo they had a case which would have taken a long time if it had been resolved by the court, so they tried arbitration, and were very satisfied with the process. He stressed that arbitration clauses are already in place in all company contracts, because if such a clause does not exist, other options for resolving disputes should be considered. Further, he stressed that he sees arbitration as a supportive and very efficient process, especially in cases of dispute resolution in the financial sector.

Besa Gashi, Legal Specialist at Raiffeisen Bank, stressed that arbitration as a process for solving dispute resolutions has been quite promoted, and it has a legal basis for development through the Law on Arbitration. Whereas, regarding arbitration in financial institutions and the inclusion of arbitration clause in contracts where subjects are two business entities, Gashi estimated that it greatly facilitates the work of banks, taking into account the complexity of contracts. According to her, the financial sector is not yet practicing the inclusion of arbitration clause in contracts, but with support from different projects and awareness raising campaings, it will begin to be incorporated. Furthermore, she spoke about the inclusion of the arbitration clause in loan contracts with natural persons, where she said that the European Union has created arbitration for consumers, where other issues are being resolved besides those between business entities. Gashi stressed that the launch of such an initiative in Kosovo would be very positive, and would greatly facilitate the work of the financial sector.

The activity “Commercial Justice Days: Arbitration in Focus” is organized by the American Chamber of Commerce in Kosovo in cooperation with USAID Commercial Justice Activity Program, and includes a series of virtual forums aimed at raising the awareness of businesses on alternative resolution mechanisms for solving commercial disputes.