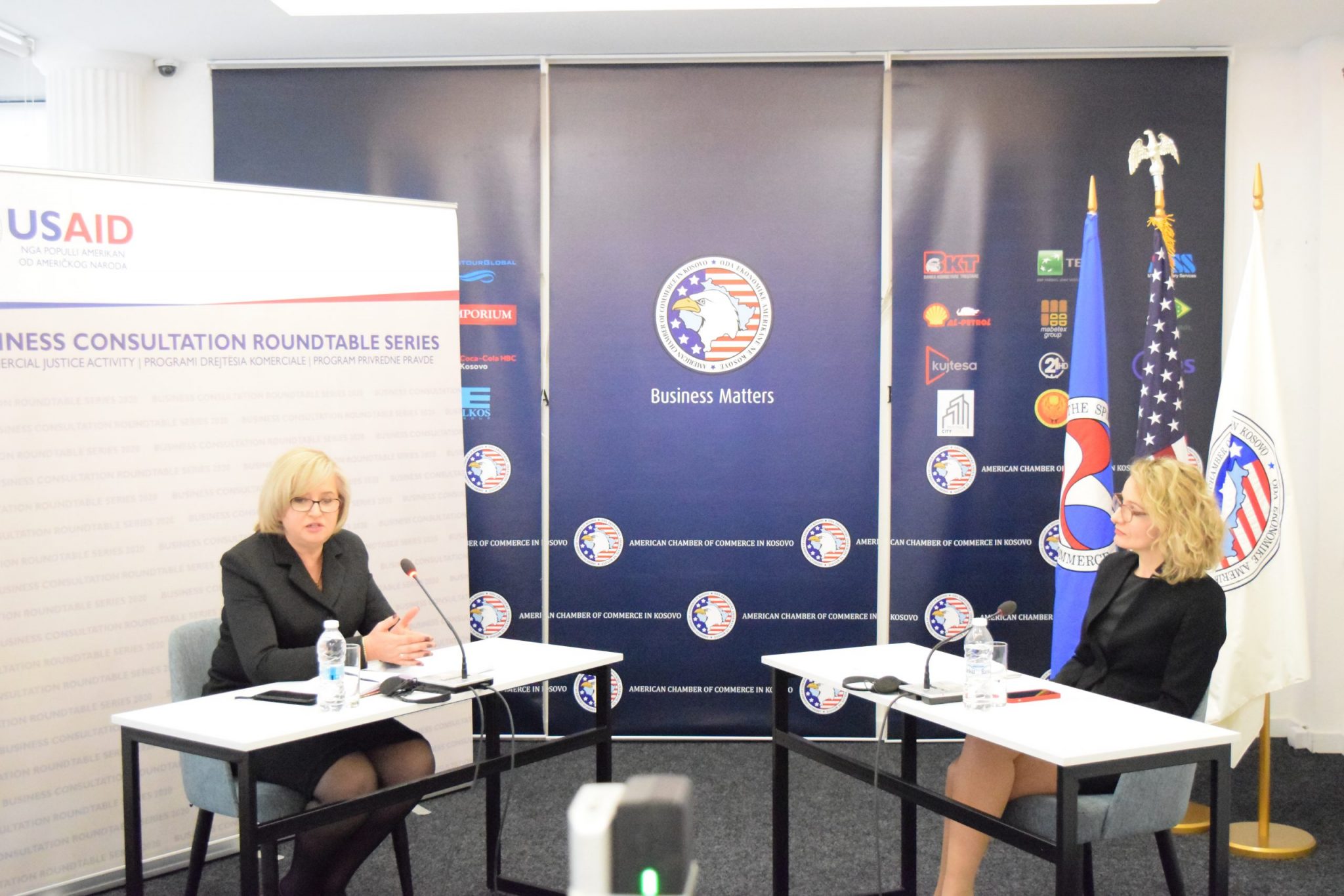 Prishtina, 15 December 2020 – There are often dilemmas among businesses and professionals regarding options for resolving business disputes, respectively between the court and arbitration as an alternative method, therefore, during the activity “Commercial Justice Days: Arbitration in Focus” organized by the American Chamber of Commerce in Kosovo and the United States Agency for International Development (USAID) Commercial Justice Program, through a virtual forum the pros and cons of arbitration vs courts in terms of resolving commercial disputes were discussed.

Merita Stublla Emini, Attorney-at-law and Arbitrator at AmCham Arbitration Center, said that despite the opportunities offered in both options, arbitration offers the greatest advantages to businesses, as the legal basis, mechanisms and opportunities offered in arbitration are more advanced, simpler, more flexible and faster in relation to the courts. Stublla Emini stressed that based on her information, the legal system in Kosovo currently has 300,000 cases, while the average time for resolving a civil case is seven years, thus discouraging the parties and the overall justice to prevail, and creating high costs for handling cases through the judicial system, as well as affecting the work of businesses. Nevertheless, she stated that this does not mean that we should be against the justice system, but we should be able to change the current conditions in order for justice to be in its trails at the right time.

Sokol Elmazaj, Chairman of the Steering Council of AmCham Arbitration Center noted that after a dispute arises between businesses it is important to know if the parties are interested in finding a solution and continuing their business activity, or are only interested in winning the war. He stated that contractual disputes can emerge from situations that are not necessarily at the will of the parties fulfilling the contract, and often it is economic circumstances that can lead to the inability of a party to fulfill its contractual obligations. Elmazaj stressed that if businesses are interested in quick and flexible dispute resolution, arbitration has more advantages over the court, as the process does not follow rules written on the rock, such as those that the court must follow. He also stressed that Kosovo is currently evaluating the establishment of the Commercial Court, which is a very important step that will help a lot in resolving commercial disputes by the courts.

Vjosa Shkodra, USAID Commercial Justice Program Deputy Chief of Party, noted that the second year of this five-year program is now nearing completion, and that the successes achieved with the current project are tangible and sustainable reforms for the commercial justice system in Kosovo. Shkodra stated that resolving business disputes through the courts is one of the objectives addressed by this project, while mentioning that the procedures for establishing a Commercial Court are extremely good news for businesses, as in addition to resolving disputes, having a court of law also helps in attracting foreign investors. She highlighted that although arbitration has a legal framework, tribunals and arbitrators, without a Commercial Court there is no legal certainty especially for foreign investors, which automatically affects the quality of life for the citizens of Kosovo.The activity “Commercial Justice Days: Arbitration in Focus” is organized by the American Chamber of Commerce in Kosovo in cooperation with USAID Commercial Justice Activity Program includes a series of virtual forums aimed at raising awareness of businesses on alternative resolution mechanisms for solving commercial disputes.