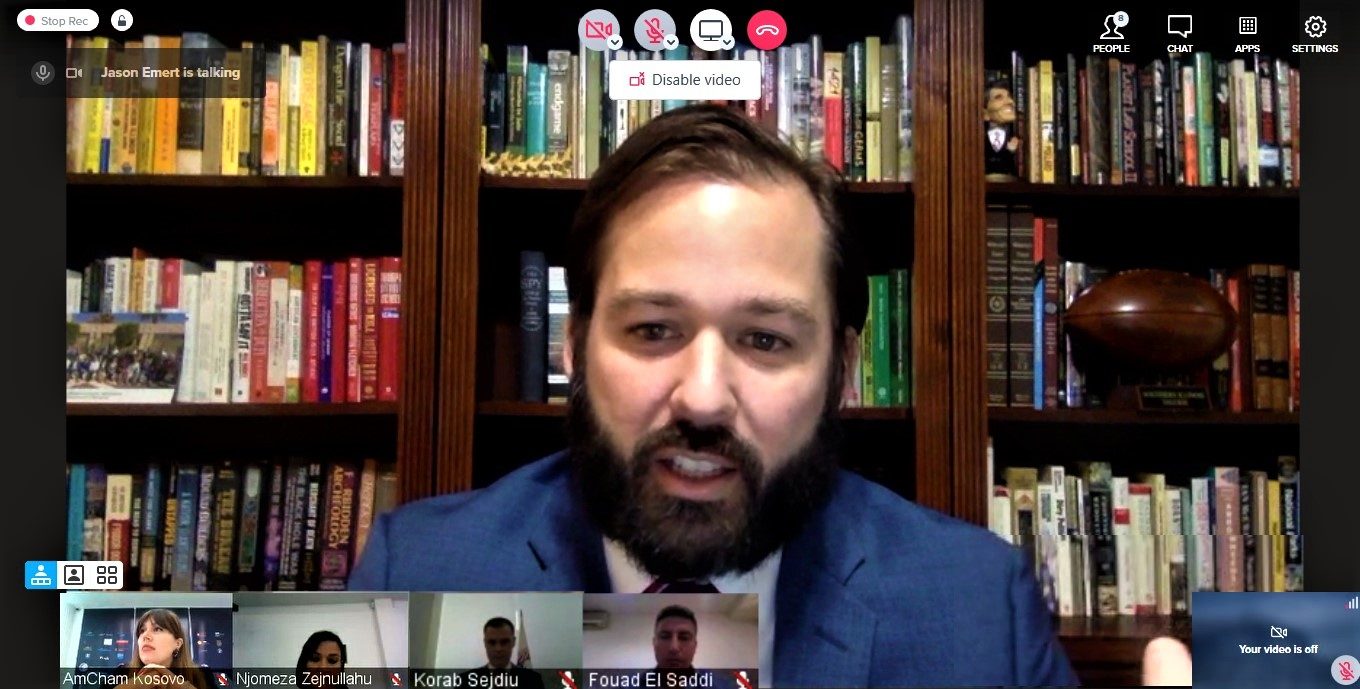 Prishtina, August 24, 2020 – The Arbitration Center of the American Chamber of Commerce in Kosovo organized a virtual forum on the importance and benefits of arbitration as an alternative dispute resolution method, during which AmCham members had the opportunity to discuss this process with arbitrators Korab Sejdiu, Njomëza Zejnullahu, Fuad El Saddi and Jason Emert. The discussion particularly focused on the settlement of commercial disputes during the pandemic.

Korab Sejdiu, Founding Partner of the law firm Sejdiu&Qerkini, and Arbitrator at AmCham Arbitration Center, while mentioning the challenges that the legal system is facing during the pandemic period, stressed that arbitration as an alternative method of resolving disputes is of vital importance during this time. Sejdiu stated that businesses should not be discouraged by the lack of an arbitration clause, since they can use this dispute resolution process even if it wasn’t initially included in their contract, as long as both parties agree to such a thing. According to him, arbitration awareness campaigns should be strengthened further, because despite the efficiency of the courts under normal circumstances, arbitration is always an accessible and flexible process.

Njomëza Zejnullahu, Arbitrator at AmCham Arbitration Center, as well as Senior Legal Advisor at USAID Commercial Justice program, stressed that this program is constantly in support of relevant stakeholders for promoting the arbitration process and the establishment of the Commercial Court. Zejnullahu emphasized that arbitration as an alternative process for resolving disputes does not clash with the work of the courts, but in fact supports and supplements them. According to her, having a court that deals with issues of a commercial nature and co-exists with arbitration will be very beneficial for Kosovar businesses. Furthermore, Zejnullahu stated that USAID Commercial Justice program is working closely with Kosovo institutions, AmCham and other stakeholders to promote arbitration as an alternative method of resolving commercial disputes.

Jason Emmert, Arbitrator and Managing Director of Emert Group U.S. stressed that the COVID-19 pandemic has imposed a transformation of legal processes even in the United States, which so far had functioned in a traditional physical way. He stressed that commercial courts and arbitration benefit from each other as arbitration eases the burden of the courts, while this period of pandemic will only strengthen dispute resolution mechanisms. Emmert also pointed out that Kosovo has benefited a lot from its recognition thanks to sports, so arbitration which includes sports law is very necessary, given that some violations in sports law are more easily dealt with through this mechanism than through courts.

Fouad El Saddi, Arbitrator in AmCham Arbitration Center and Managing Partner of Saddi Law Office in Beirut stated that in every crisis or challenge there is an opportunity for development. According to him, because the courts are overloaded and cannot handle all cases, arbitration is being promoted along with other alternative methods for resolving disputes. He pointed out that COVID-19 has created a good opportunity for the development of arbitration as the most appropriate method for resolving disputes, while sharing with forum participants that in the state of Lebanon arbitration is being promoted through examples of cases resolved through this method.