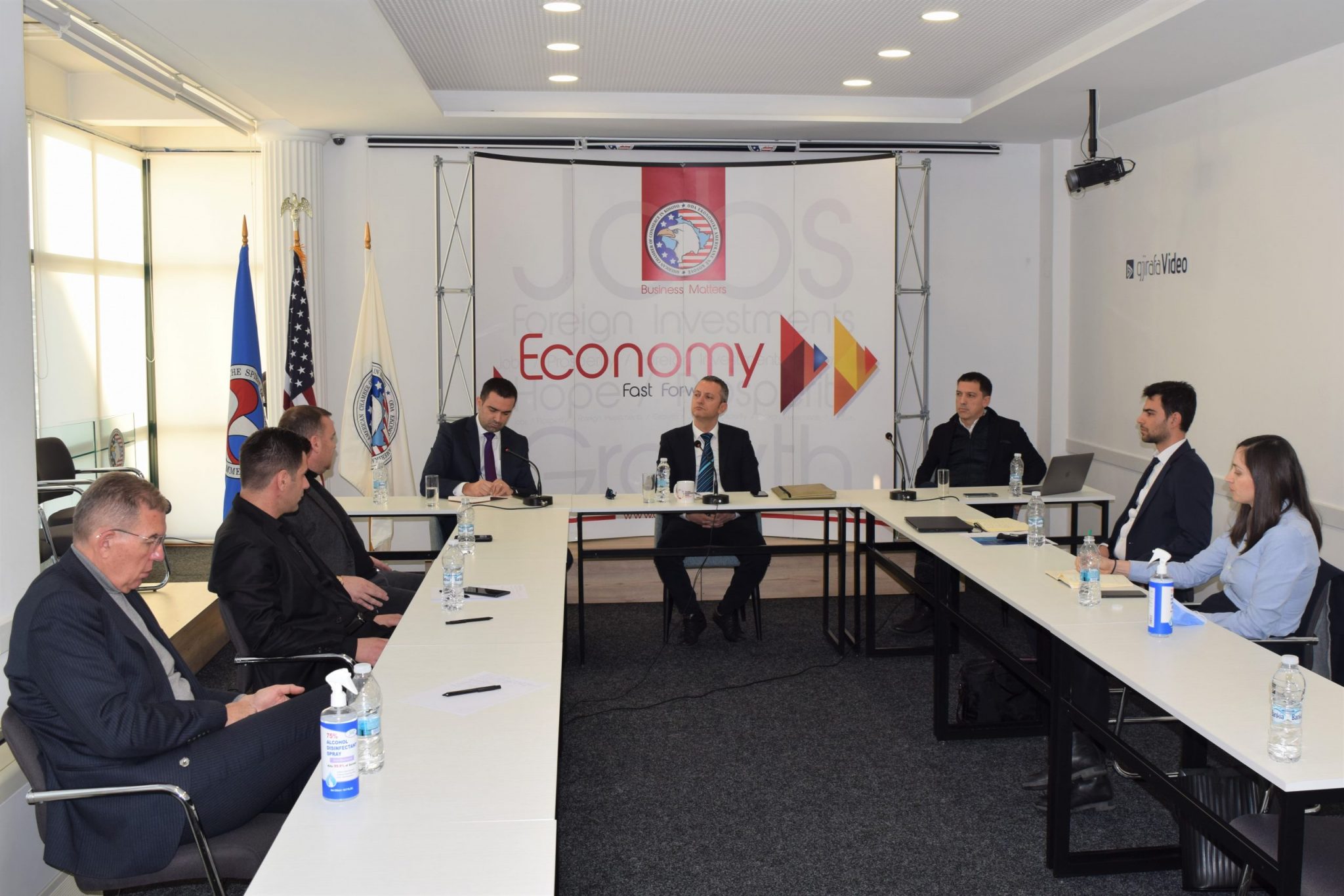 Prishtina, February 16, 2021 – The American Chamber of Commerce in Kosovo hosted a livestreaming roundtable of discussion, during which, together with representatives of AmCham Board of Governors as well as respective committees within this organization, the recommendations of private sector enterprises for the new Government which is expected to be created following the latest parliamentary elections were discussed. Immediate economic package support for pandemic-affected businesses, the completion of the legal framework in a consistent manner, combating the informal economy, functionalizing the market economy, and supporting manufacturing were some of the recommendations summarized in this discussion, among others.

The Executive Director of the American Chamber of Commerce in Kosovo, Arian Zeka, stated that being cognizant of the challenges that have characterized Kosovo’s economy continuously, on top of those we have faced last year since the outbreak of the COVID-19 pandemic, many tasks await the Government, and the American Chamber of Commerce in Kosovo will continue to be active in its advocacy efforts while mentioning that AmCham will submit a document with concrete recommendations from the private sector to the Government.

Part of the panel for this discussion was Dardan Sejdiu, consultant and AmCham member, who said that on top of his expectations is the duration of a full Government mandate, which he considers to be a precondition for general social stability, particularly in the economic aspect as well as that of development policies. According to Sejdiu, given the contraction of the economy due to the pandemic, the Government should use the low level of public debt so as to seriously intervene by pouring money into the economy, and at the same time provide clarity of fiscal and trade policies, in order to provide businesses with certainty for investment.

Moreover, he stated that he expects the Government to generally provide a clearer approach regarding fiscal and trade policies, social and public property and social protection schemes. Such clarity would affect a general easing and consequently increase consumption, having some impact on increasing aggregate demand, which would then translate to an increase in public revenues.

Whereas, the other panelist, Entrepreneur and Member of AmCham Board of Governors, Ardian Hoxha, expressed his overall dissatisfaction about the delay in the economic intervention of the state, by holding the entire political class responsible for their role in not implementing the necessary aid for businesses. Hoxha stated that following the last election campaign, the business community rightfully expects from the new Government a total opening of the economy, without any restrictions. Furthermore, he reiterated the need to implement economic packages to help the private sector, at the same time considering possibilities for increasing public debt.

“A SWOT analysis should be conducted to see where Kosovo stands in comparison with the countries of the region and beyond, so as to focus on the opportunities much more than on the risks or weak points we have,” said Hoxha.

This roundtable discussion was also attended by representatives and chairpersons of AmCham committees. The chairwoman of the Tax Committee, Gresë Rexhepi from the company PwC, stressed the need to take the passage of fiscal legislation seriously, together with combating informality. The chairman of the committee for Trade and Customs, Avni Krasniqi from the company Delfin, mentioned the need for formalization of the market, which would also clarify fiscal and trade policies.

Shkumbin Muçolli, the member of AmCham Board of Governors, recommended the creation of packages dedicated to the sectors most affected by the pandemic, as well as the digitalization and formalization of the economy. From a manufacturer’s perspective, Gojart Kelmendi from EuroKosova, a member of the Manufacturing Committee, stated that he expects the Government to direct public spending to locally produced goods, as well as to create tax incentives for exports. Whereas, Mal Osmani, a representative from the company Deloitte, stressed the need for orientation towards green policies and sustainable development.