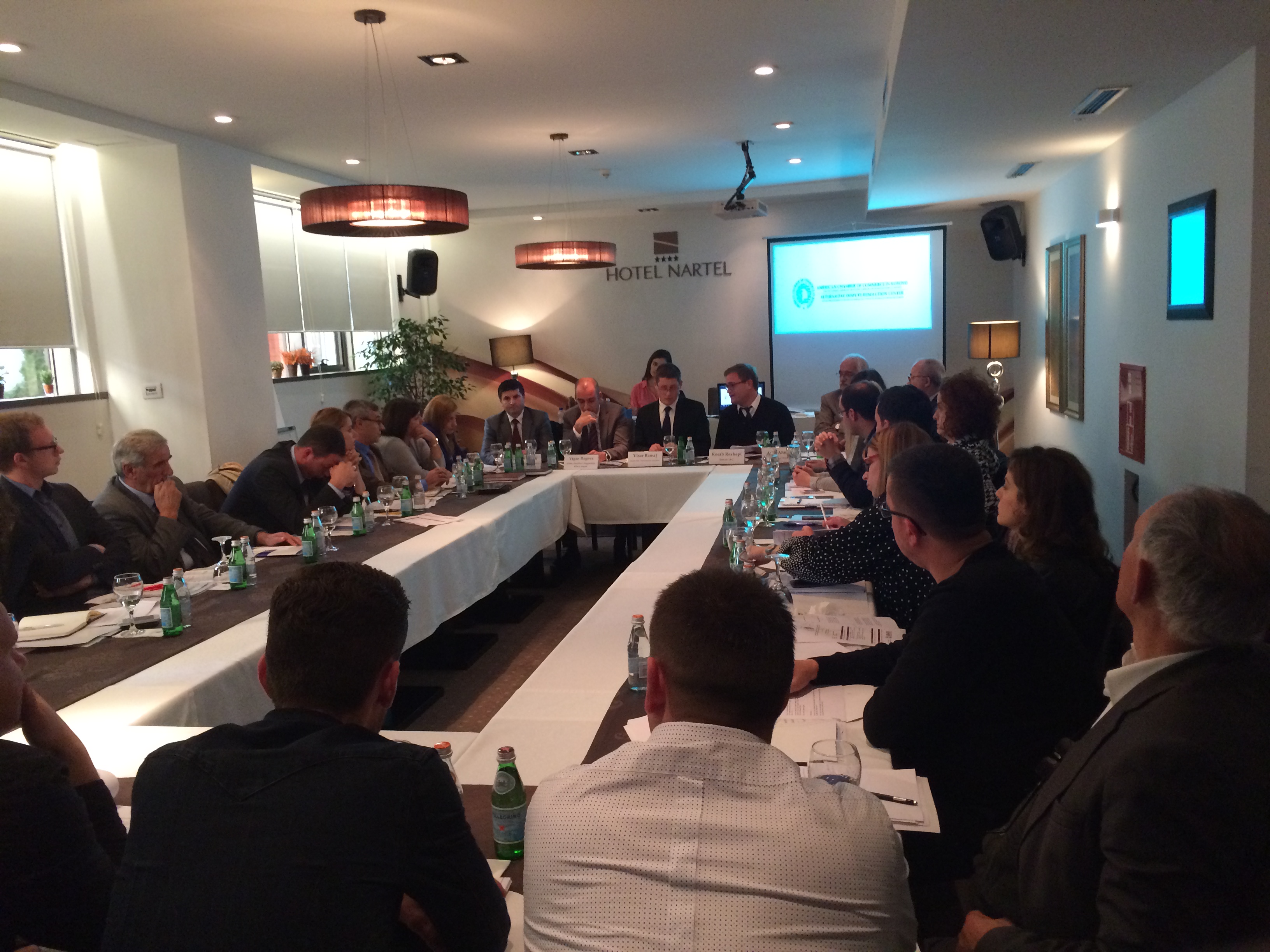 In the opening speech, the Secretary General of the ADR Center of the American Chamber of Commerce in Kosovo, Visar Ramaj, informed that the focus of this workshop is on the procedures of arbitration and the importance of the written part (Statement of Claim, Statement of Defense, notices) as well as the hearing sessions from panelists with experience and expertise in this field. In order to help businesses, he also presented professional materials that were prepared from the Amcham ADR Center that include simplified summaries of procedures and samples of documents that are used in arbitration.

Avdi Ahmeti, lawyer and arbitrator in the List of Arbitrators of AmCham, in his presentation focused in the historical development of arbitration in Kosovo and shared his experience during 30 years of serving as an arbitrator. Moreover, he drew comparisons between the Kosovo Judical System and arbitration procedures by showing the parties what to expect from each system. Mr.Ahmeti suggested that when it comes to their transactions, businesses should always provide the arbitration as an option for their own legal predictability.

By thanking the American Chamber and USAID for this event, lecturer of arbitration in the University of Prishtina, Valbon Mulaj, focused in three topics that revealed how businesses must analyze the procedures of arbitration: The advantages over courts, legal requirements while drafting arbitration clauses, and methods of managing a case as an arbitrator. Among other things, Mr. Mulaj assured the parties that arbitration offers much simpler and more efficient procedures compared to the courts, in addition through concrete examples on how arbitrators manage cases he showed the participants how to maintain their professionalism on arbitration and how to prepare the evidences.

A discussion of differences between arbitration and judicial proceedings, including written procedures, was done by panelist and lawyer Korab Rexhepi, who shared his experience with judicial procedures as well as arbitration from a lawyer’s perspective. Amongst others, he spoke about the procedural advantages of arbitration, drafting documents for use in arbitration, and shared experiences through which he showed that in arbitration every claim and piece of evidence provided from the parties is evaluated in great detail. Rexhepi also encouraged businesses to utilize arbitration due to its numerous advantages.

The same advice was supported by arbitrator and General Counsel for the company FINCA, Vigan Rogova, who insisted on the inclusion of arbitration clauses in the contracts, however advised to do so while exercising great caution regarding two specific matters: negotiation and drafting of contracts. He advised the attendees to request the involvement of people experienced in drafting contracts and shared his expertise on counseling companies and why arbitration remains the preferred method for dispute resolution for serious companies.

The debate continued with representatives from businesses and partner universities who raised matters of various kinds, ranging from basic treatments of cases, disputes that cannot be resolved in arbitration, to the establishment of clinics in the field of arbitration.

The meeting was closed by the AmCham ADR Center’s Secretary General, Visar Ramaj, by thanking the attendees and inviting the companies to refer to AmCham for specific advices with respect to arbitration.

This workshop was made possible with the support of USAID’s “Forward” initiative, as part of the Project for Capacity Development of AmCham’s ADR Center.