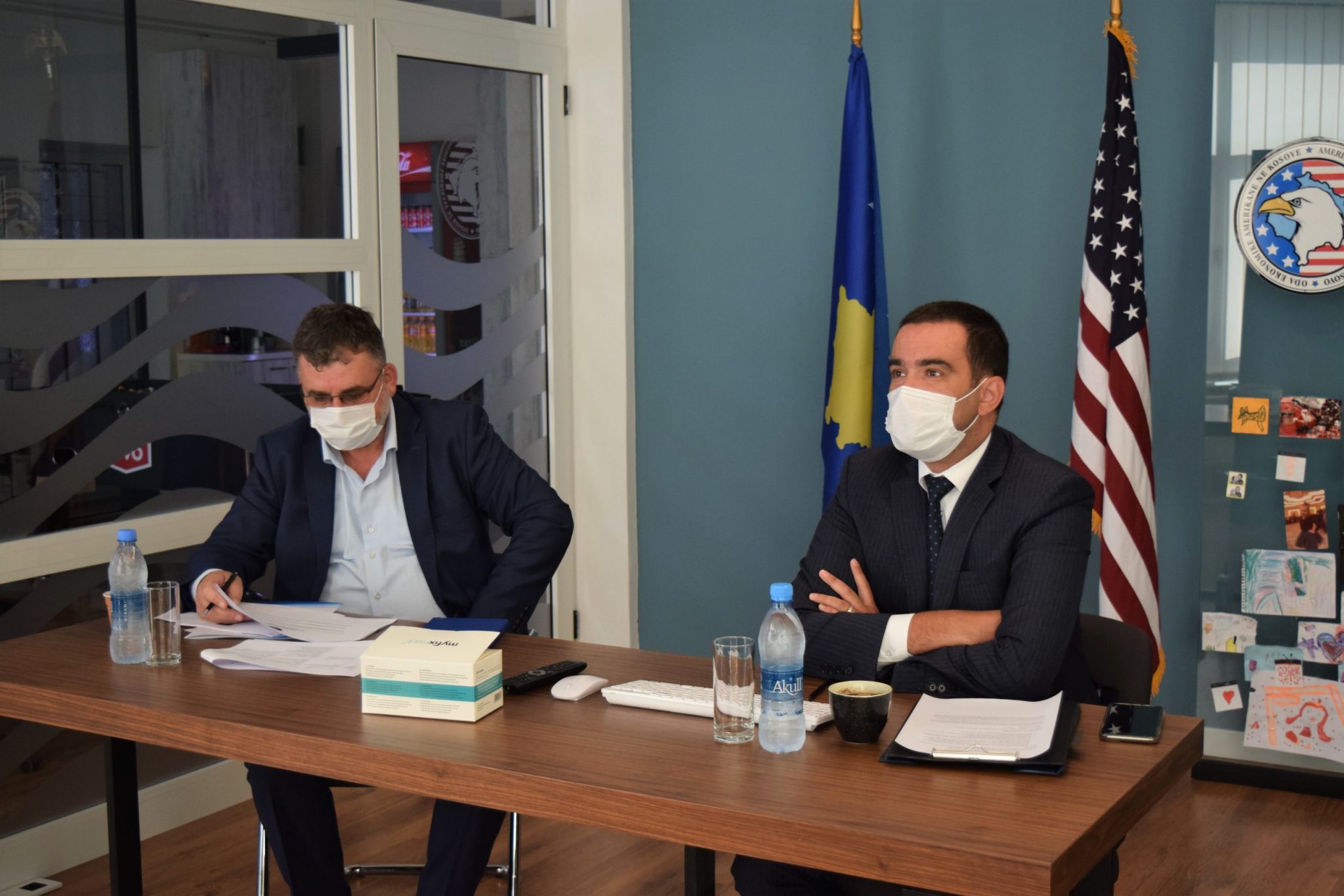 Prishtina, August 10, 2020 – The American Chamber of Commerce in Kosovo organized a virtual conference with the Minister of Economy and Environment, Blerim Kuçi, during which the recovery of the country’s economy and Government’s opportunities for private sector support were discussed. During this conference, Minister Kuçi spoke about the strategies to achieving genuine economic recovery, Government’s support for private enterprises of all sectors, as well as the necessary changes in the legal aspect for enabling the implementation of recovery measures.
AmCham’s Executive Director, Arian Zeka, called for acceleration of the procedures for approving the draft laws that provide support to the private sector, while emphasizing that AmCham members have consistently provided recommendations to the Government in order to help the country’s economy during this situation of crisis.
Minister Kuçi emphasized that the work of the Ministry of Economy and Environment is based on the curriculum for economic reform 2020-2023, which also contains nine measures intended for economic recovery, through which it is aimed to provide support to all private enterprises affected by the crisis caused due to the outbreak of the pandemic. According to Minister Kuçi, the draft law on interim measures to alleviate the effects of COVID-19 includes facilitating access to finance, reducing the tax burden, supporting employment, subsidizing the wages of the private sector workers, and overall stimulation of aggregate demand. Minister Kuçi emphasized that considering the impact of COVID-19, capital investments foreseen for this year have been halved in order to create the necessary funds for economic recovery. He also mentioned that despite recent political developments in Kosovo, the Government remains focused on implementing the measures for economic recovery, while stating that the strategies used are in coordination with the mechanisms and practices of international institutions.
During this conference, representatives of AmCham member companies, as well as the chairpersons of various committees within the Chamber, had the opportunity to provide a more detailed overview of the impact COVID-19 pandemic has had on their activities, as well as recommendations on the support the private sector needs.
Entrepreneur Ardian Hoxha, Chairperson of AmCham’s Digital Economy Committee stressed that Kosovo needs smart investments in the information technology and communication sector, which according to him has the greatest potential for growth but is hampered by the most basic barriers, citing the urgent need to advance the Draft Law on Electronic Identification and Trusted Services in Electronic Transactions.
Avni Krasniqi from Delfin, at the same time being Chairperson of AmCham Trade and Customs Committee, emphasized that implementing the measures to aid the private sector must be done as soon as possible in order to avoid further job losses.
Milazim Abazi from BDO Kosova, Chairperson of AmCham Finance Committee, stated that the Government must strongly support the private sector and facilitate the implementation of projects and the provision of grants by international financial institutions in Kosovo.