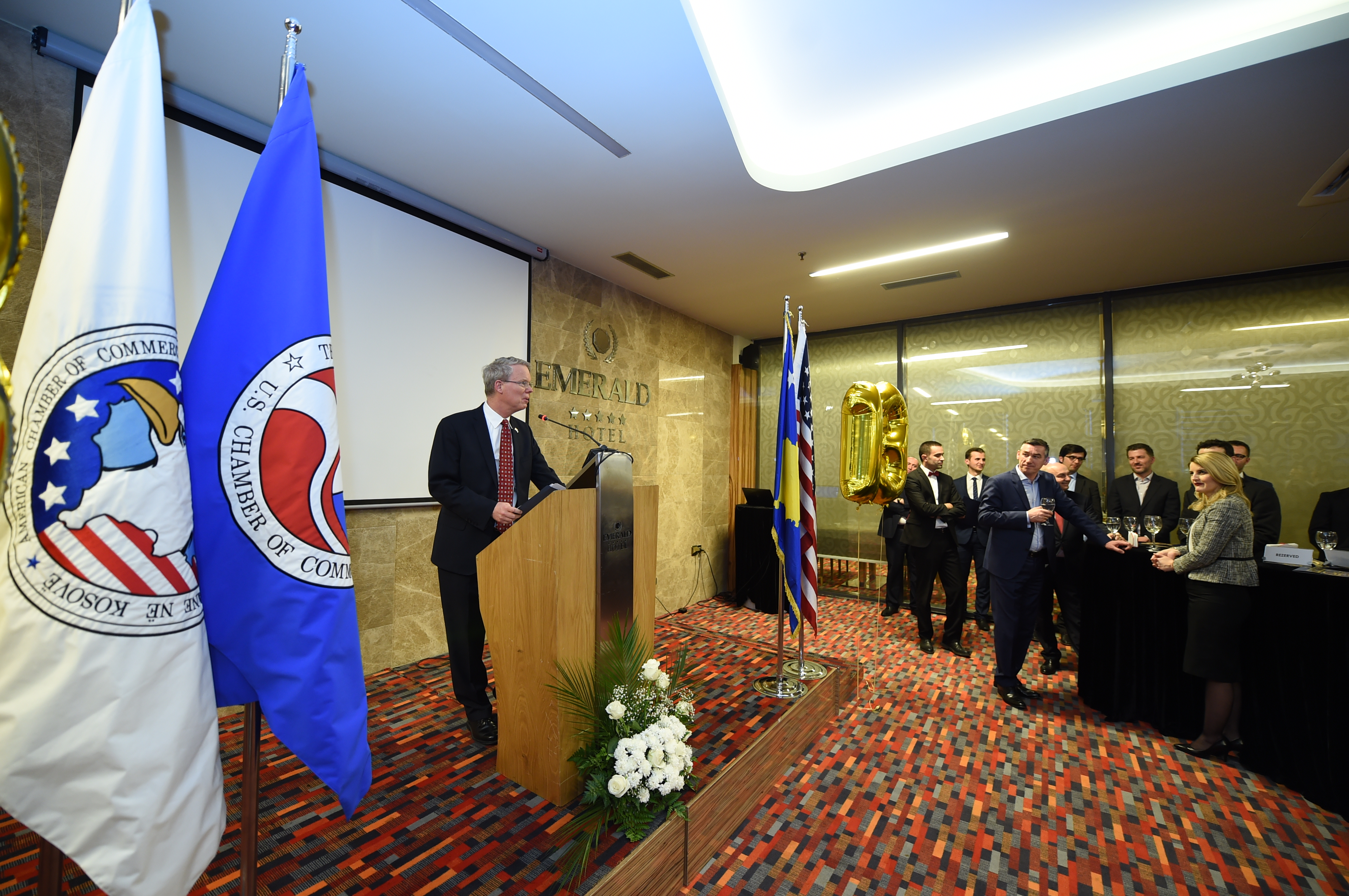 Prishtina March 24, 2017 – The American Chamber of Commerce in Kosovo organized a reception, on the occasion of 13th anniversary. In addition to members, AmCham welcomed the US Ambassador to Kosovo Gregory T. Delawie, President of the Assembly Kadri Veseli, Prime Minister Isa Mustafa and ministry and other international institutions representatives.

U.S. Ambassador in Kosovo Greg Delawie evaluated as remarkable the fact that AmCham founding members have been embracing American business values since before Kosovo was an independent republic, thus confirming that they have understood that economic growth, and the businesses that contribute to that growth, play an essential role in this country’s development and its security.

He emphasized the importance of this legacy being carried on, with a more active role in facilitating Kosovo’s greater integration into the global community and in increasing its security through economic development. He encouraged members of AmCham to speak with a louder voice about the issues that are holding back Kosovo’s economy, as no Government can solve big economic problems without the active support of business.

Ambassador Delawie said that he has learnt from the meetings with local politicians, businesspeople, and average citizens, that their interests go beyond the issues that seem to dominate the political news in Pristina, and instead they care about unemployment, insufficient economic growth, education and corruption.

AmCham Executive Director Arian Zeka, expressing the gratitude for the attendance of representatives of the most important institutions, spoke about some of the main achievement of the Chamber throughout these years, thus highlighting the fact that AmCham Kosovo is the only AmCham out of 45 AmChams in Europe to provide arbitration; it has a foundation, which supports charity causes, it has a chess school for children and has recently established the Economic Policy Institute, which will generate reliable data, which Kosovo is in need of.

President of AmCham Board Mergim Cahani said that the attendance of the highest officials of state and international institutions. Cahani added that AmCham has continuously contributed towards facilitating doing business in the country, by one should also have in consideration the technological developments, which would enable a more efficient business environment.

President of the Assembly Kadri Veseli congratulated AmCham members on their anniversary and said that its establishment, before the independence is an important indicator of American support for Kosovo, thus emphasizing that state institutions remain committed to take into account recommendations of AmCham and other business associations.

Prime Minister Isa Mustafa praised AmCham’s contribution in attracting investments from American businesses. Mustafa pointed out that the Government in partnership with the Chamber has created economic policies, has drafted fiscal policies, including Fiscal Package 2.0, thus expressing his willingness to further partnership towards economic development for Kosovo.