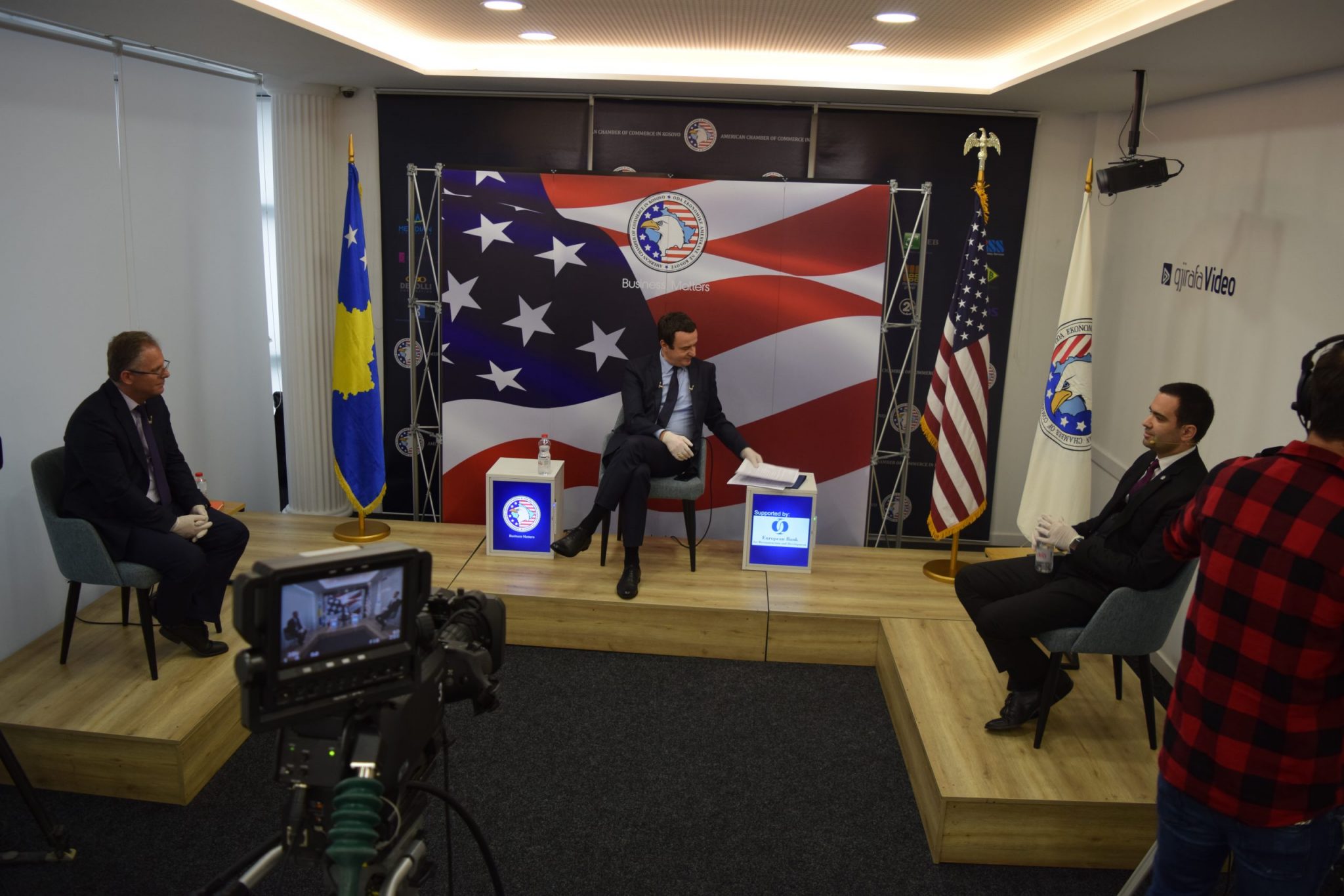 Prishtina, April 21, 2020 – The economic crisis caused by the pandemic not only in Kosovo but across the globe, has largely conditioned the limitation of economic activity, while the lessons learned from it should be used to open new horizons. his was concluded during a virtual forum organized by the American Chamber of Commerce in Kosovo with the acting Prime Minister Albin Kurti and the acting Minister of Finance and Transfers.

The Acting Prime Minister of the Republic of Kosovo, Albin Kurti, stressed that the COVID19 pandemic has sparked an unprecedented crisis with a double impact on health and the economy not only in Kosovo, but globally. According to him, while countries around the world have used fiscal and monetary policies to deal with this crisis, Kosovo has been handicapped with the possibility of using only fiscal policies, which has made it difficult coping with this situation. The acting Prime Minister emphasized that the Government he leads has addressed the crisis by calculating and optimizing every decision, in order to maximize economic activity and minimize health damage. He stated that his governing program includes increased focus on economic development, which aims to be achieved by formalizing the economy, fighting corruption and motivating production. Kurti stressed that this unique situation has proved the importance of domestic production, and has shown the need to replace imports with local products.

Besnik Bislimi, the acting Minister of Finance and Transfers, stated that the purpose of the emergency package was not to cover the total economic damage, as this would be impossible. According to him, the package is designed to minimize the damages as much as possible, and at the moment it only addresses emergency issues, while additional support for the economy will be provided in the recovery package. Bislimi stressed that targeting within the emergency package has been stopping the increase of poverty, the employee as a bridge between household and production, covering the aggregate cost for businesses and the additional cost for municipalities. Bislimi stated that for the new package of economic recovery he will consul former Ministers of Finance, and that he is closely following the practices and instruments that other countries are using to relax this situation in economic terms, so as to assess which steps can be adapted to our economy.

Arian Zeka, Executive Director of the American Chamber of Commerce in Kosovo, stated that considering the unstable economic structure of Kosovo, together with the President of the Kosovo Chamber of Commerce, Berat Rukiqi, and entrepreneur Visar Ramajli, have presented an opinion which predicts that during the recovery phase, Kosovo has the opportunity to develop a new development-oriented economic model. On this occasion, he mentioned the example of Ireland, which after the crisis of 2008 with good political and social coordination and economic strategies focused on maintaining growth, managed to positively change the economic course of this country.

This virtual forum of the American Chamber of Commerce in Kosovo was supported by the European Bank for Reconstruction and Development, and the European Union (EU)’s Enterprise Development Investment Facility (WB EDIF).