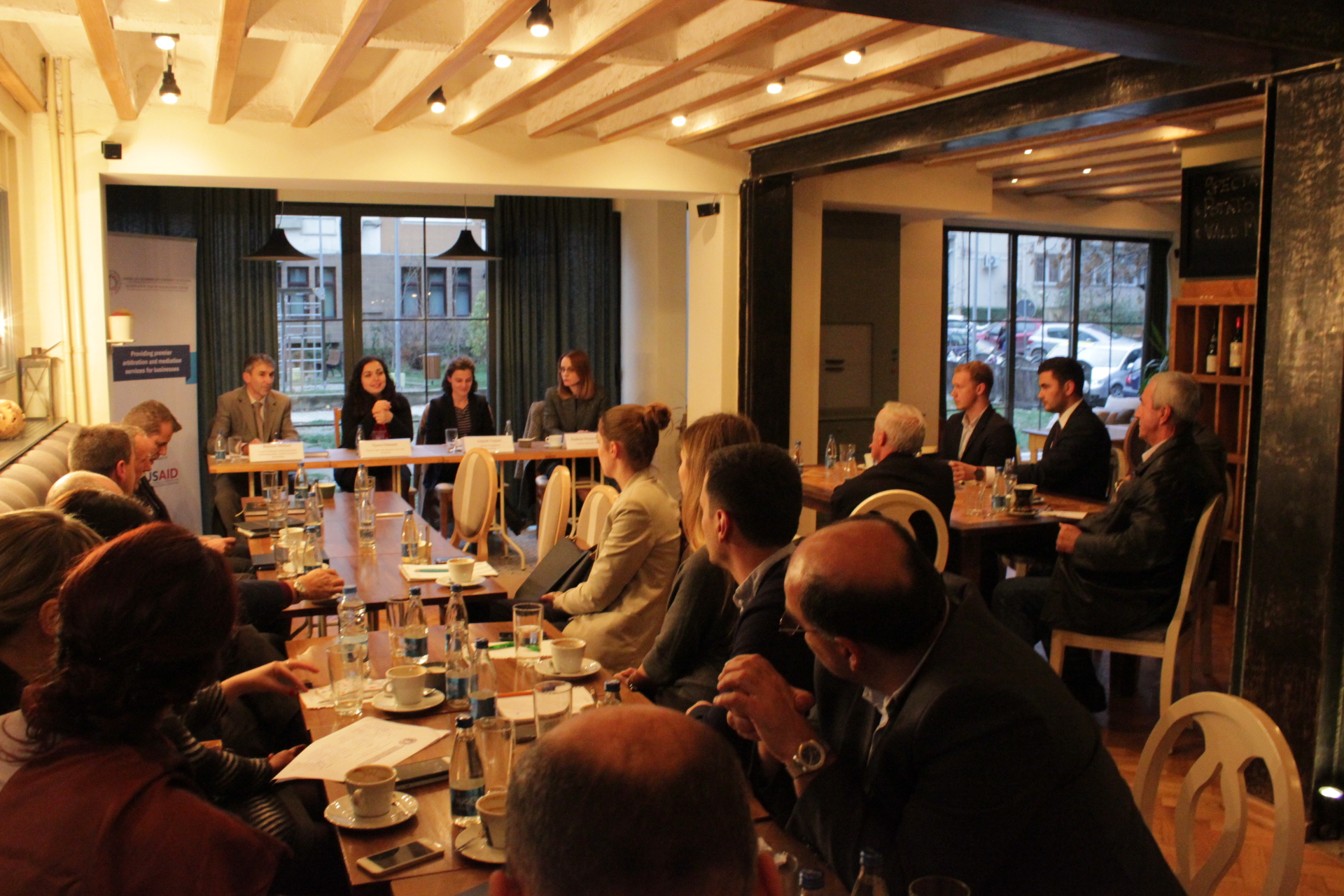 Prishtina, November 26, 2015 –  Establishment of a favorable environment for dispute resolution through arbitration outside the national courts, the use of commercial arbitration in Kosovo, and the challenges and obstacles to the use of this method compared to the advantages that it offers, were the focus of a round table discussion organized by AmCham Kosovo Alternative Dispute Resolution Center, under the topic ‘Challenges in using arbitration in Kosovo’.

Based on the questions posed to panelists, the attendees of this round table discussion expressed their interest on the competences of the courts to resolve commercial disputes, procedures to appeal an arbitral award, and the relation between courts and arbitration. This round table’s panel consisted of Vjosa Osmani, Legal Expert and Member of Kosovo Assembly, Bajram Miftari, Presiding Judge (Department of Economic Matters in the Basic Court in Prishtina), Kujtesa Nezaj – Shehu, Arbitrator, and Anjezë  Gojani, Secretary General of AmCham Kosovo Alternative Dispute Resolution Center.

In the opening remarks, Ms. Gojani discussed arbitration in Kosovo and the establishment of a very favorable environment for dispute resolution outside the state courts in the country. Nonetheless, she stressed that businesses and the legal community are still in the early stages of incorporating this method in their way of doing business.

Further, Mr. Miftari expressed his views on the law on arbitration, describing it as independent and autonomous from interference of the court. He also shared with the participants’ information regarding the courts’ competences related to arbitration, and the supportive role that the former have in arbitration proceedings.

On the other hand Ms. Osmani highlighted alternative dispute resolution through arbitration as a precondition for the rule of law. She further explained the need for Kosovo to ensure the advancement of arbitration as a method that can benefit the businesses community.

Based on the nature of doing business in Kosovo, Ms. Nezaj – Shehu elaborated on the hesitancy of businesses in the country to address their disputes to arbitration. She further urged that a study should be conducted with the purpose of identifying the main cause of this reluctance, which would then serve as basis for a joint strategy on eliminating existing prejudices.

The roundtable continued with a highly interactive discussion between panelists and participants on the topic in question.