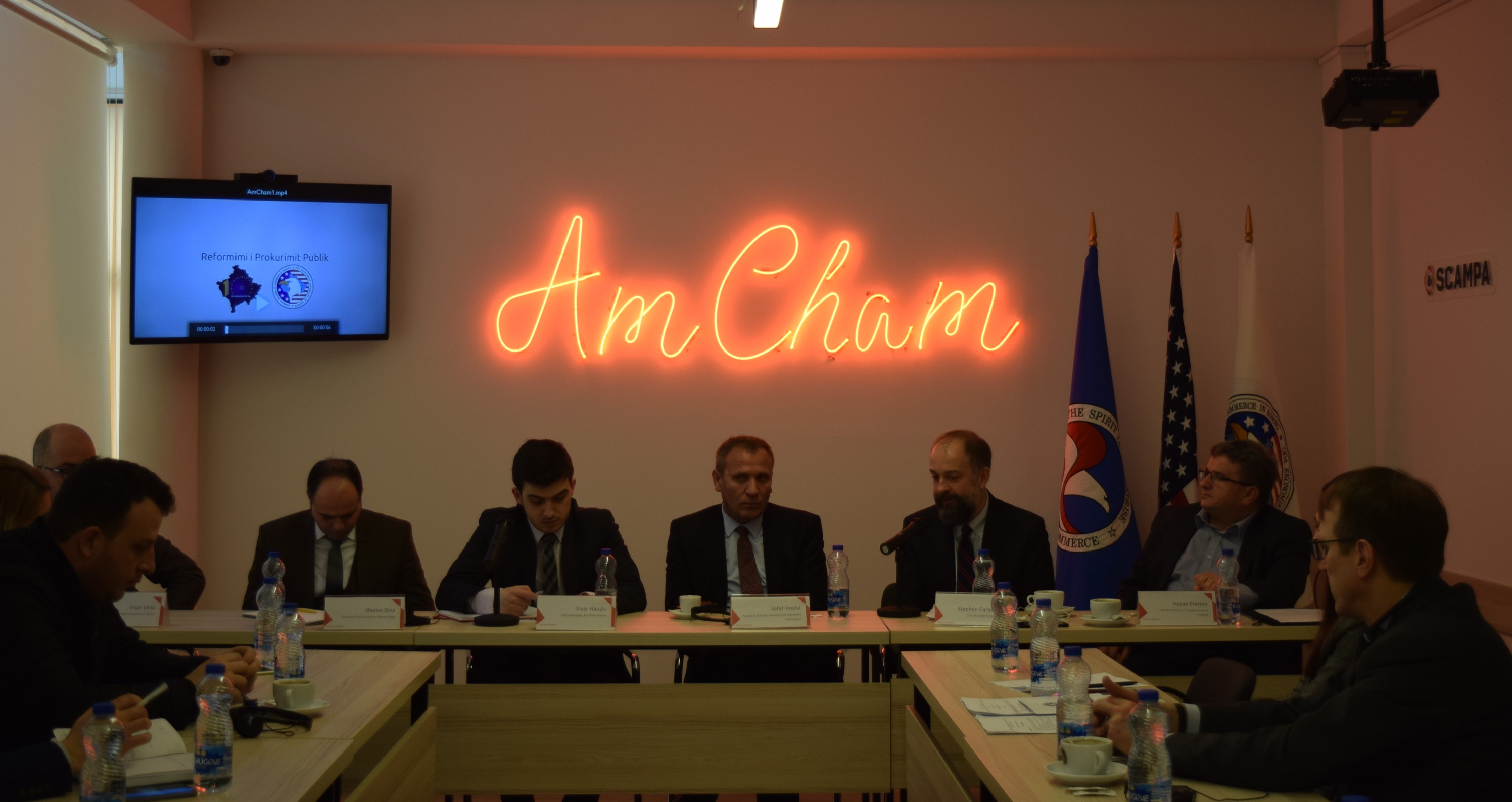 Prishtinë, February 14, 2018 – Public procurement in Kosovo still faces numerous challenges even 10 years after its independence, despite the positive advancements from the electronic procurement platform implementation. The achievements in this field during the last ten years and the further steps in increasing accountability and transparency were the main discussions in the roundtable organized today by the American Chamber of Commerce in Kosovo titled “Reforming the Public Procurement”.

Safet Hoxha, President of Public Procurement Regulatory Commission, explained that the law on public procurement continuously has changed since the independence. Since these changes were made to reflect the challenges faced in the implementation and also adopt the European directives in this field, he said that sometimes it is difficult for the business community to follow all changes. Besides the obvious challenges related to public procurement in the country, Hoxha expressed his encouragement on the developments made in implementing the e-procurement platform, a step that increases transparency, accountability, and the competition in procurement processes.

Blerim Dina, Chairman of Procurement Review Body, mentioned the main challenges faced by this institution since its establishment, stressing the attempts in increasing professional capacities. He explained the PRB Board currently has only 3 members, despite the fact that it is required for the board to have 5 members, this making this institution’s work difficult and increasing the pressure on the members.

Stephen Carpenter, COP of USAID TEAM project, explained the scope of this project and the attempts on improving the public procurement system in the country. He said that during these years many civil organizations have prepared reports and various studies which have recorded the most common problems in public procurement procedures and identified the places where corruption could emerge from. He said that implementing e-procurement will help in addressing problems in procurement by reducing the physical contact between institutions and businesses, requiring to work faster in establishing the electronic method on procedures for the submission of offers from the economic operators.

On the other side, Visar Idrizi, Representative of ViPrint, said that the main source of problems and corruption in public procurement is the technical specifics drafting phase. In this direction, he required that these technical specifics to be prepared by this field’s professionals. Idrizi also said that in certain occasions even PRB damages the economic operators because of misunderstanding in interpretation or its close connection with the law in force, since the non-efficiency of the judiciary system means that businesses hesitate in addressing court cases after having been treated from PRB.

Hasan Preteni, from Center for Ethics, Transparency and Integrity, said that public procurement remains amongst the most problematic spheres in the country, where perception on the presence of corruption is in a very high scale. He mentioned that changing the laws and regulations oftentimes this creates ambiguity and possibility of increasing corruption. He called upon the independent agencies functioning in this field to be protected from the political impact, so that they can do their job independently and efficiently.

Further on, AmCham members had the chance to discuss the most common challenges in public procurement that they have faced until now, stressing the importance of drafting the technical specifics from the field’s experts