Economic recovery to enable the restructuring of the country’s economy 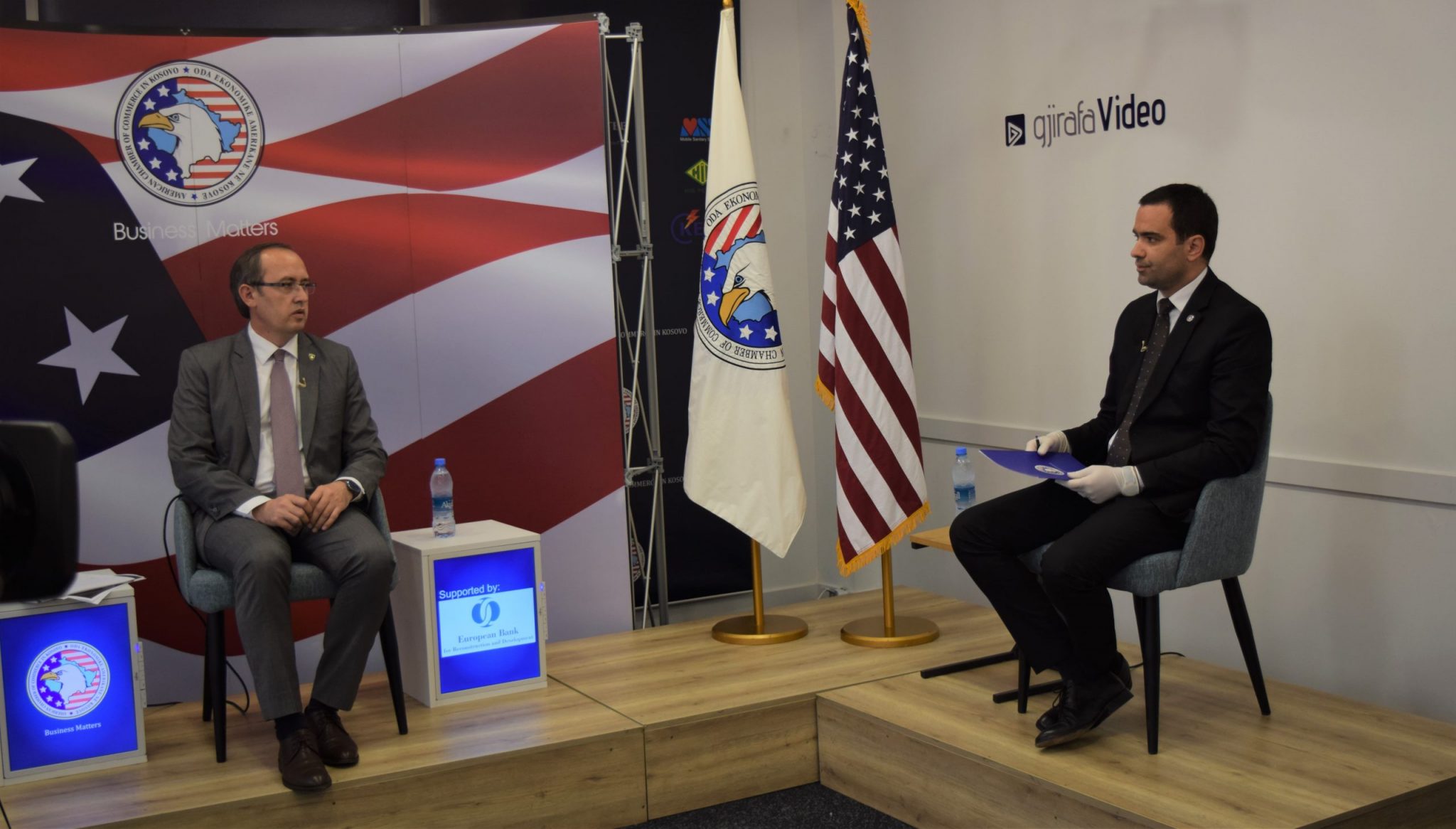 Economic recovery to enable the restructuring of the country’s economy

Prishtina, 22 June 2020 – The American Chamber of Commerce in Kosovo organized a virtual forum with the Prime Minister of the Republic of Kosovo Avdullah Hoti, where the recovery package and opportunities for economic restructuring including attracting American and other foreign direct investments were discussed. Funding for this virtual forum was supported by the European Bank for Reconstruction and Development, and the EU’s Enterprise Development and Investment Facilitation Program.

Arian Zeka, AmCham Executive Director, stressed that he is very pleased that several AmCham recommendations have found place within the Government’s recovery package, even though there has been no active communication between the parties. Zeka stated that this delicate time calls for greater dynamism and the full implementation of all measures of the emergency fiscal package, as well as of those in the recovery package. Speaking of recovery measures, Zeka mentioned that which focuses on the support of companies against obstacles that may arise from the pandemic, while stating that one of the main difficulties that companies have faced for a long time is the lack of legislation on electronic transactions. He also mentioned the need to make the U.S. economic zone functional.

“This project has been presented many times in the United States, while its non-functioning would be bad news in attracting American and other foreign investors, as it would indicate a lack of consistency in governance.” stated Zeka.

Prime Minister Hoti stated that it is of great interest to create the necessary social consensus for the governing program, which focuses on economic recovery.

“Our main focus remains economic recovery, but beyond that we have a pretty detailed program in certain areas of the economy,” stated Prime Minister Hoti.

He stressed that the COVID-19 pandemic has served well in laying a solid foundation for the development of Kosovo’s economy in the long run, and for the reconstruction of the mechanisms that ensure this development. Prime Minister Hoti expressed optimism for the recovery phase, stating that he expects the economic downturn to be smaller compared to the initial estimates.

According to the Prime Minister, the long-term plan is based on the development and promotion of investments in the private sector, and includes the possibility of privatization of public enterprises or other modalities. During this forum, Prime Minister Hoti unveiled in detail the Government’s plan for recovery, which focuses on private sector development and investment growth, as well as the restructuring of the country’s economy. He also spoke about the development of the special American economic zone, where he emphasized that efforts toward the development of such zone will be made, as it is a tool for attracting foreign direct investments. Asked about the economic aspect of the potential discussion in Washington, where the Prime Minister is invited to attend this weekend by President Trump’s special envoy for Kosovo-Serbia peace agreement, he stressed that a strong economic agenda could be a good boost for the dialogue process between Kosovo and Serbia.

“We are now at the point where we need to dialogue for mutual recognition and then for the normalization of relations in every aspect, economic and political, the aspect of circulation and of all issues which need to be normalized as two states which recognize each other,” stated Prime Minister Hoti.