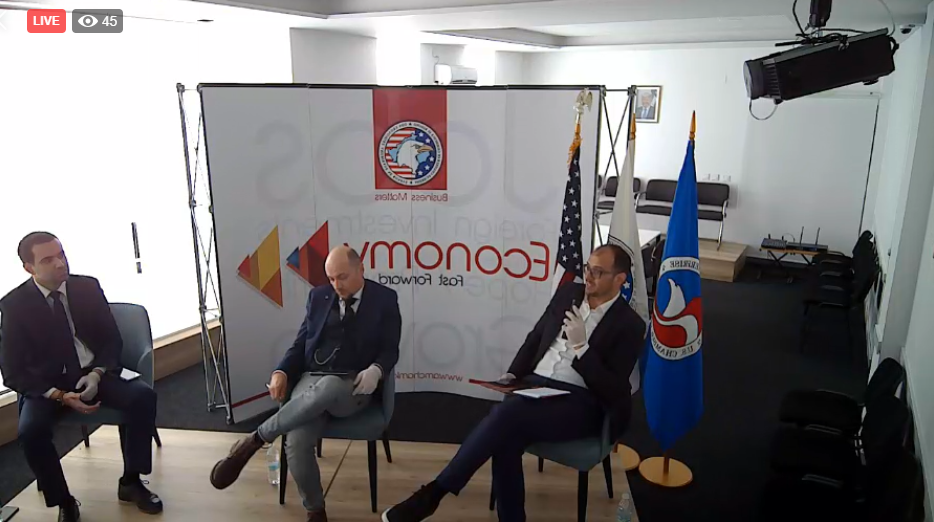 Prishtina, March 18, 2020 – Following the situation caused by the global pandemic COVID-19, that has conditioned minimal physical interaction among people, the American Chamber of Commerce in Kosovo has started organizing virtual forums. The business outlook for dealing with this epidemic was discussed during such a forum with Bersant Disha from Recura Financials and Astrit Leti from Cacttus. This online forum aimed at generating recommendations that could be taken by the Government of Kosovo in support of private enterprises that are facing difficulties due to the measures taken to prevent COVID-19.

The financial expert Bersant Disha, stated that as this situation is unprecedented for our country, political stability is crucial to dealing with all its aspects in a timely manner. According to him, the blocking of the cash flow in the economy causes a domino effect which affects the bankruptcy of enterprises, increases unemployment, and eventually causes an economic crisis. Disha stressed that if this situation continues without Government’s efforts to support the private sector, the consequences will be noted in a short period of time. In addition, he added that revenues from sales and liquidity have fallen sharply in many economic sectors, and these will result in an increase of the difficulty to pay workers.

Astrit Leti emphasized the importance of making concrete decisions that leave no room for interpretation, especially during this situation. Leti stated that the creation of stimulus packages from the Government for businesses is more than necessary, while stressing that such measures could be taken as an example from other states that have also been affected by the pandemic. According to him, companies will need operational-type incentives such as plans for employee retention, payrolls, and other operations, so that they can keep their activity going. Moreover, Leti added that extra care should be taken not to break any supply chain link, as this would have a very negative effect on the entire economy of the country.

Participants of the virtual forum and numerous business representatives had the opportunity to ask questions, present their requests and recommendations which were mainly related to the tax and loan payment, as well as to the need of creating sustainable value chains.