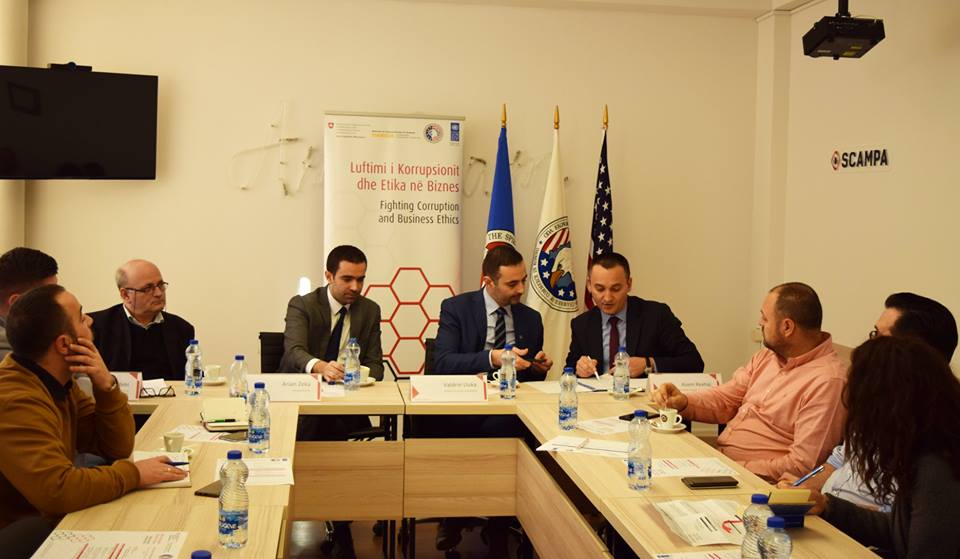 Prishtina, January 25, 2018 – Tackling and fighting corruption in the mining sector will result in attracting serious investors in this sector with high potential for Kosovo. This was said in the roundtable organized by the American Chamber of Commerce supported by UNDP’s Support to Anti-Corruption Efforts in Kosovo (SAEK), titled “Tackling Corruption in the Mining Sector”.

Arian Zeka, AmCham Executive Director, said that the complicated, lengthy and bureaucratic procedures often result in the emergence of corruption, which is why institutions should not allow this to happen. He explained that in the past the American Chamber of Commerce continuously has required a one-stop-shop for this industry, so that investors could have one way of communication only while applying for permission in exploration or exploitation.

Valdrin Lluka, Minister of Economic Development, said that the ministry he leads is in the process of developing policies that decrease the possibility of corruption and help in attracting serious investors in this sector. He mentioned that there were many occasions, in the past, where various companies got the exploration license for certain areas solely in selling it for a higher price for another interested company. Minister Lluka also said that developing new energy capacities is of crucial importance in the mining sector’s development. Although, he added that a crucial element in using the mining potential of Kosovo is by the good management of Trepça’s transformation process.

Azem Rexhaj, Board Member of Independent Commission on Mines and Minerals, expressed his disappointment in the lack of efficiency in treating corruption and misusage cases which have been presented in the Prosecution Office in the mining sector. In addition to this, Rexhaj explained the role that KPMM will have after the approval of the new legislation on Mines and Minerals as the only way of communication for the investors when applying for permission and licenses, stressing the importance of increasing the institution’s capacities in playing this role. Rexhaj also mentioned the importance of working in legislations and regulations’ harmony in this field, taking into consideration the current challenges from current legal ambiguities.

Bedri Halimi, Chief Inspector of the Inspectorate of the Ministry of Environment and Spatial Planning, explained the inspectorate’s role in protecting the environment and its challenges on a day-to-day basis. Halimi mentioned the plethora of occasions of illegal sand and gravel exploitation from illegal operators, and the inspectorate’s goal in identifying and fighting these cases. Meanwhile, he expressed the necessity of judiciary institutions in increasing the efficiency of treating these cases, by fighting these negative phenomena.

In the end, the attendants in this roundtable had the chance of sharing their personal experiences in this sector, offering suggestions in tackling corruption and creating preconditions in attracting serious investors.