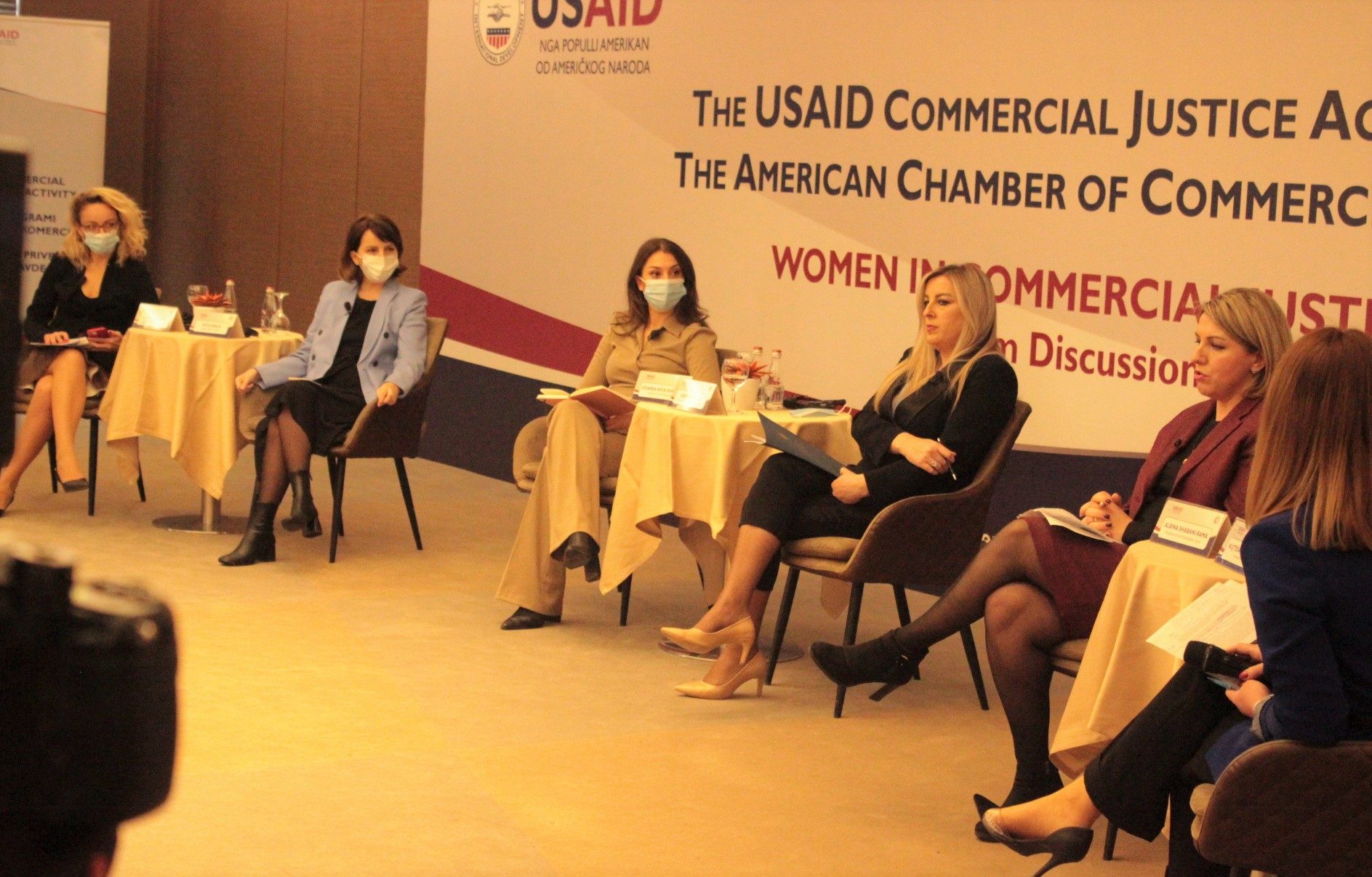 Prishtina, November 24, 2021 – To discuss the importance and role of women’s injustice, the American Chamber of Commerce in Kosovo, jointly with the USAID Commercial Justice Activity has organized the Women in Commercial Justice event.

“Fundamental value with the Constitution is also gender equality in political, social and cultural life. Kosovo has passed the Law on Legal Equality, where 30% of women are represented in the Kosovo Assembly. Women have proved that they are deserving of representation in decision-making through the relevant successes,” said Caka Nimani.

USAID Kosovo Mission Director Zeinah Salahi said that in Kosovo 1/3 are women judges, asserting that women’s participation in legal professions offers high value to society. Salahi said that a new democracy, which characterizes the state of Kosovo, is a worthy commitment to improving justice. According to Salahi, USAID is focused on working for the commercial justice system in the rule of law, however, despite great achievements, women are largely represented in Kosovo.

Salahi stressed that “women’s participation in legal professions offers high value to society. More women should be encouraged to engage in legal processes for the rule of law.”

The Executive Director of the American Chamber of Commerce in Kosovo Arian Zeka said that in Kosovo the number of women judges is 33%, adding that increasing women’s participation affects increased of confidence in the work of courts.

“For those of us representing the private sector we are notified of how important a justice system is. I believe that increasing women’s participation affects increased confidence in the work of the courts. In the United States, 34% of judges are women. The number of women judges in Kosovo is 33%,” Zeka said.

The member of the Assembly of the Republic of Kosovo Doarsa Kica Xhelili said almost all women have faced gender discrimination. She said the move from a lawyer to MPs has been unforeseen and that she has assessed that she has the potential to contribute as an MP. Further, Kica Xhelili said that in terms of commercial justice, he estimates that each of the women has faced gender discrimination.

Nita Shala, Deputy Minister of Justice, said successful women in the country have been successful for her examples. “Examples of success have served me too. I’ve been curious to learn about injustice. Vjosa Osmani was the first person to introduce me to the field of law. The other factor is the determination to see the challenges as an opportunity to face them,” stressed Shala.

Arjeta Sadiku, a member of the Kosovo Judicial Council, said her experience in the United States of America has served her to continue her journey in Kosovo. She said that as a lawyer, then even as a professional associate she met successful European judges who served in our country.

The head of the Basic Court in Prishtina, Albina Shabani Rama, said she enjoys the fact that women have taken leadership positions in different institutions, saying that the role of women is heard everywhere and that the very presence of women in the judicial system means it is diversified.