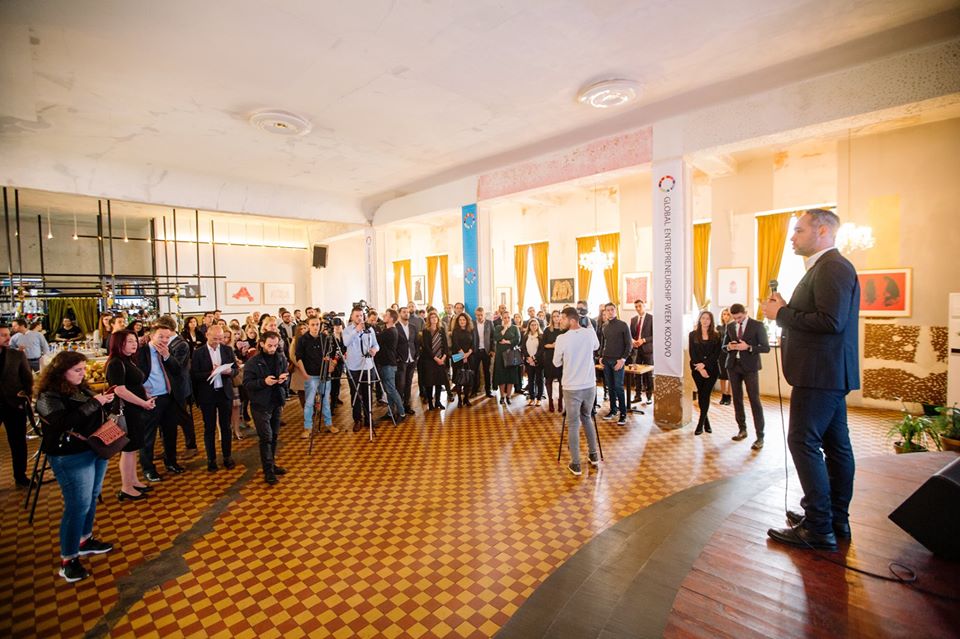 Prishtinë, November 18, 2019 – Under the leadership of Innovation Center Kosovo (ICK) and in cooperation with the American Chamber of Commerce in Kosovo, the Global Entrepreneurship Week in Kosovo has begun, during which 180 countries worldwide organize various activities in order to promote entrepreneurship and encourage entrepreneurial activities.

At the opening event of this week, the executive director of ICK, Uranik Begu, stated that for the past 7 years, it has become a culture for entrepreneurial communities including here all partners, donators, government, organizations and startup businesses to gather during Global Entrepreneurship Week in order to advance entrepreneurship as a path of creating new vacancies. Furthermore, he added that this year around 60 organizations have united for the same noble mission, to promote entrepreneurship and encourage young entrepreneurs to work towards making their dreams come true, despite the barriers they might encounter. Begu pledged that more than 80 activities will be organized during this week, emphasizing the fact that entrepreneurial awareness is increasing in all regions of Kosovo, unlike in the previous years when activities were mainly focused in Prishtina.

The Deputy Head of Mission at the Embassy of Sweden, Nasrin Pourghazian, has stated that she feels happy about the inclusion of education as a means to promoting entrepreneurship during GEW.  Moreover, she expressed that there is more to be done in creating favorable conditions for entrepreneurship in less developed areas of Kosovo, as well as to increase women participation in entrepreneurship.

Ambassador of Kosovo to the United States, Vlora Çitaku, stated that both the youth and the entrepreneurial spirit are key factors to pushing Kosovo forward. According to her, over 60% of our country’s GDP comes from services and tech related industries that are gradually developing in Kosovo. Çitaku also stated that by considering the fact that we live in an interdepended world, we should work together because success is achievable only if we share knowledge and help each other.

Managing Director for Economy, Policy and Governance at the European Bank for Reconstruction and Development (EBRD), Mattia Romani, expressed that entrepreneurship is of high importance for EBRD, and as the largest investors in Kosovo, this year EBRD will invest over 100 million euros in the country. According to him, what they are most proud of is their cooperation with small businesses.

AmCham Executive Director, Arian Zeka, stated that at a time when most of the young people see no prospect in our country, the main goal of AmCham, as a partner for several years in organizing GEW, is to share as many success stories as possible, therefore giving specific examples to the youth so as to support the fact that it is possible to succeed in Kosovo. Moreover, he added that AmCham in cooperation with its partners, this week will organize 14 activities in different regions of Kosovo.