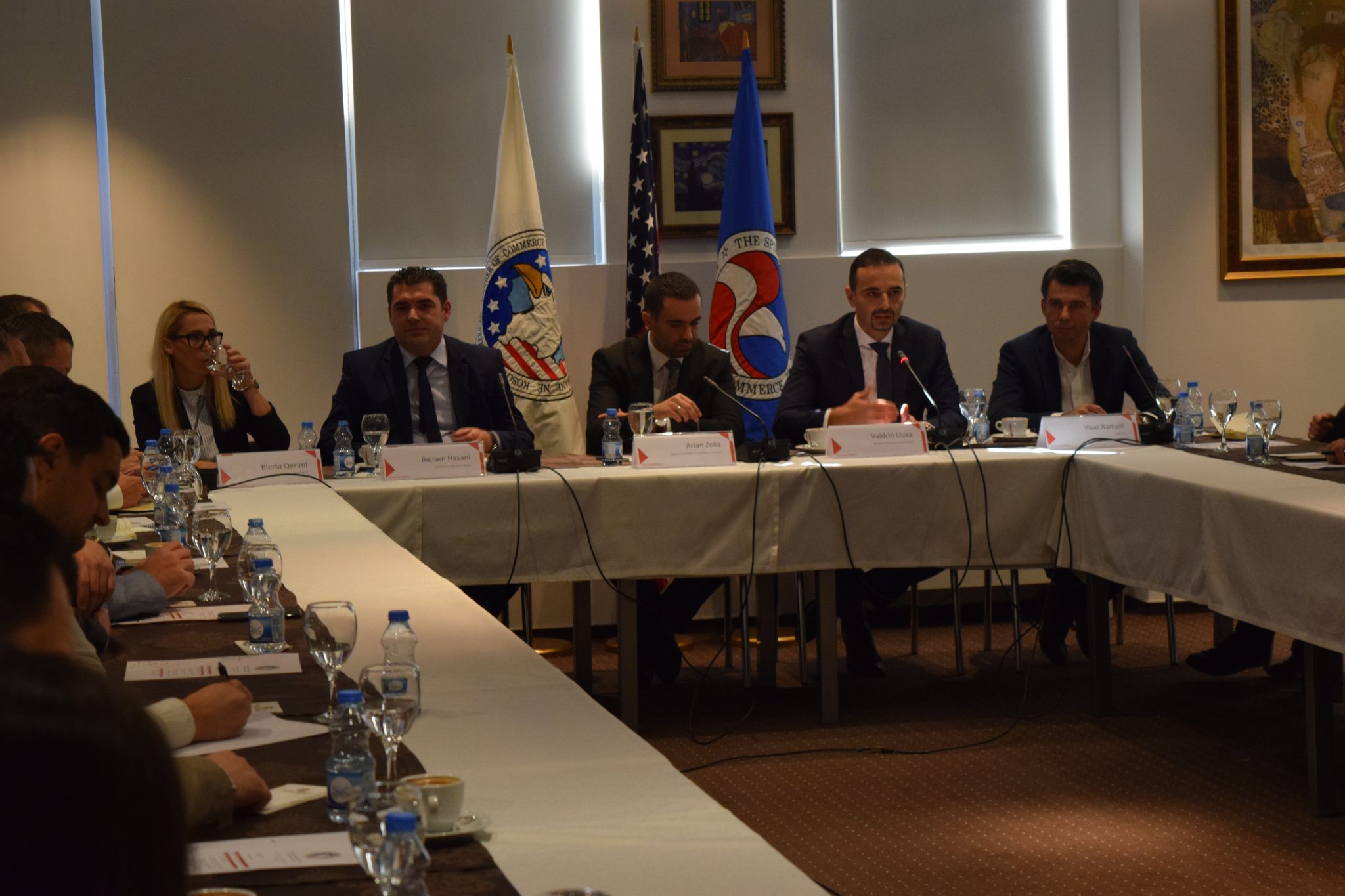 Prishtina, November 2, 2017 – Attracting foreign direct investments continues to be on the focus as a key factor for country’s economic growth. This was implied at the roundtable organized by American Chamber of Commerce in Kosovo where the attendees discussed steps that need to be undertaken by the government and other relevant institutions to improve further business environment in the country.
Arian Zeka, Executive Director of American Chamber of Commerce, said that Kosovo’s improvement on ranking in World Bank’s Report of Doing Business is to be praised, however now it is time for this to reflect in increasing the foreign direct investments, which unfortunately these recent years were not satisfactory. According to Mr. Zeka, this shows that relevant institutions, besides the efforts on improving the business environment, should work more in promoting potentials and advantages which Kosovo can offer to foreign investors.
Bajram Hasani, Minister of Trade and Industry, explained that the ministry which he leads has a key role on coordinating efforts of reform on the areas which the World Bank’s Report covers. Minister Hasani emphasized that the Law for Strategic Investment, which will be in function through by-laws, could create easiness in attracting investments. He also mentioned some plans of the Government in creating easiness and new jobs.
Valdrin Lluka, Minister of Economic Development, explained the ministry’s plans for stable power supplying as an important element for long-term economic development. In this regard, he stressed the need to accelerate the steps of the project for new power plant, noting that now they are at final negotiations with the selected company. Lluka also discussed on the Ministry plans related to renewable energy, where different investments are planned in cooperation with the European Union.
Berta Qerimi, World Bank Private Sector Specialist, emphasized that Kosovo’s improvement in rankings in the World Bank’s Report is good news for Kosovo, however institutions have to work more for economic integration of the country, taking into consideration the low level of foreign investments and exports. Also, Qerimi discussed data of another report from World Bank, where it is highlighted that investors put great importance on state incentives, free trade agreements, and the work agencies in promoting investments.
On the other hand, Visar Ramajli, executive director of KIVO LLC, expressed their experience in investments made in Kosovo from Dutch partners. He requested from the government and the relevant institutions to capitalize the results from the World Bank’s report for attracting investments. He also mentioned the need in improving the judiciary institutions’ performance as the key pillar in attracting foreign direct investments. Also, Ramajli said that it is very important that relevant institutions, based on consultations with the private sector, to undertake reforms in the educational system of the country in the function of creating a qualified labor force which fits the market’s requirements.
Further on, other participants in the roundtable discussed on their personal experience with investments in Kosovo, while convincingly saying that the environment of doing business in our country should be further improved.