Inflation, a present and future challenge 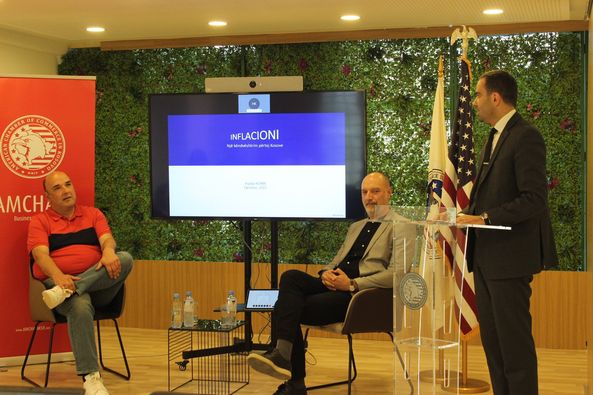 Inflation, a present and future challenge

Prishtina, June 7, 2022 – Controlling inflation was the first topic that was elaborated out of a series of events organized by the American Chamber, which focus on the future challenges for the economy of Kosovo. The panelists who participated in the first discussion of this series of events were Visar Ymeri (Musine Kokolari), Hajdar Korbi (World Bank) and Ramis Ahmetaj (Financial Expert).

Visar Ymeri, Executive Director of the Institute for Social Policy “Musine Kokolari” said that the increase in inflation in Kosovo comes as a result of the introduction of money in the market in an uncontrolled manner and within a very short time. He added that inflation started last year, with the introduction of money in the market, as a step to resume the economic cycle that was interrupted due to the pandemic. He went on to say that government policies should focus on stabilizing basic consumer prices and reducing the negative effects of rising prices on vulnerable sections of society.

Hajdar Korbi from the World Bank gave a detailed presentation on the sources of global inflation where he made a comparison between different periods of inflation in Kosovo and the Eurozone. He said it is difficult to control prices, therefore, the focus of the government should be to support the groups that are most affected by rising prices.

Financial Expert Ramis Ahmetaj said that the rise in inflation to high levels has come as a result of the pandemic, as well as the war in Ukraine. According to him, the source of inflation in Kosovo is the increase in the cost of raw materials. He said that we are in a situation where inflation is high and the supply for consumer goods will decline, if measures are not taken sooner.