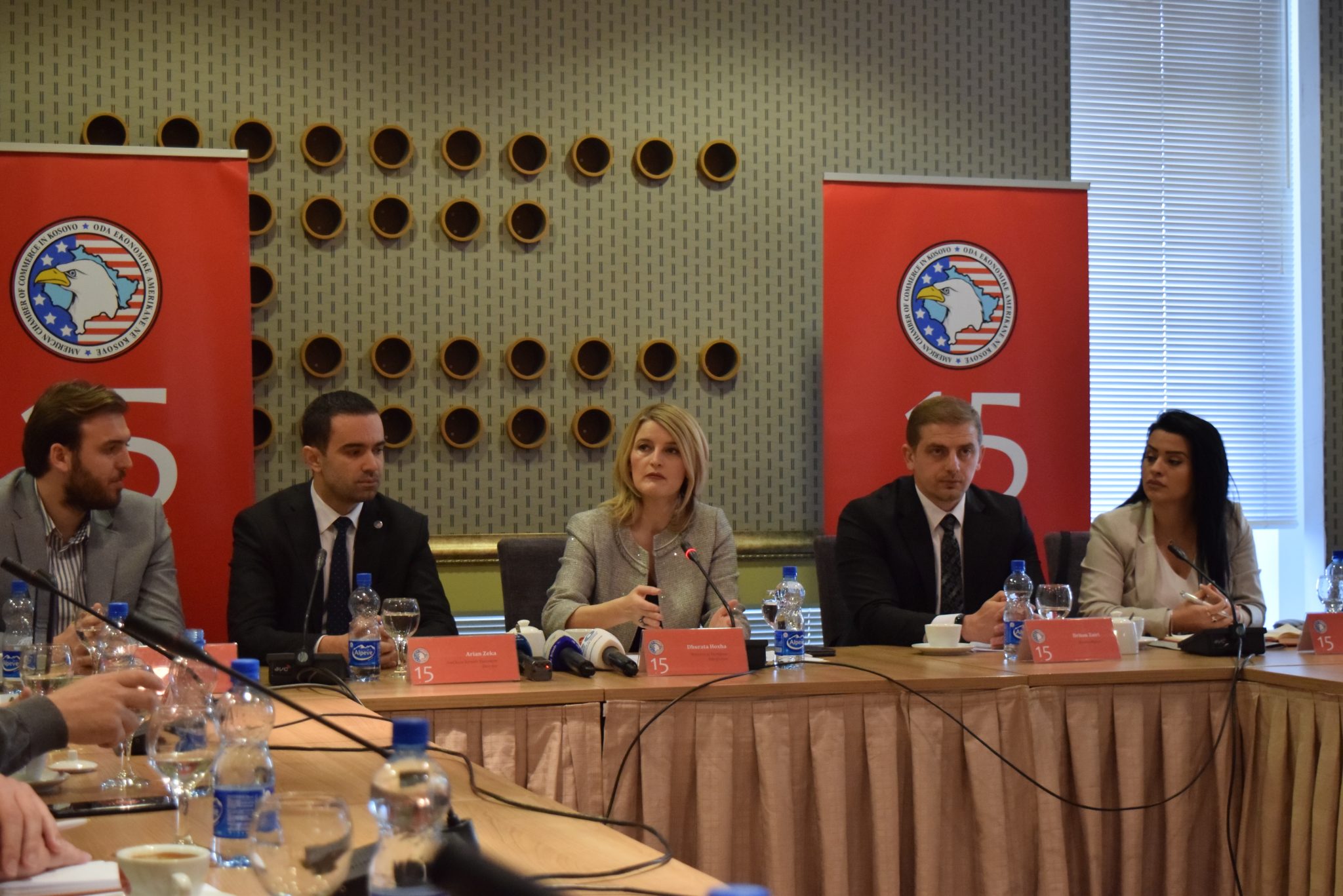 Prishtina, April 1, 2019 – There are many benefits that result from the Stabilization and Association Agreement between the European Union and Kosovo for the economy of Kosovo, however growth of Kosovar exports to the EU market remains at unsatisfactory levels. This was said during the roundtable organized by the American Chamber of Commerce in Kosovo titled “Maximizing SAA benefits” where it was discussed about issues in fulfilling SAA obligations and the benefits from this agreement in economy.

AmCham Executive Director, Arian Zeka, said that this agreement is a highly valuable framework which should be used by businesses in various sectors, mentioning that the expectations for this agreement were very high when it was signed.

Minister of European Integration, Dhurata Hoxha, said that reaching this agreement, the first contractual agreement between Kosovo and the European Union, foresees empowered democracy, higher international cooperations, promotion of regional cooperation, and economic development, amongst others.

Minister Hoxha said that applying the numerous reforms that include aligning our legislation with the EU legislation as well as increasing access of businesses to the European market are crucial in maximizing benefits that result from SAA.

Minister Hoxha added that the institution she leads will continue to coordinate the fulfillment of obligations deriving from the SAA application as well as the European Reforms Agenda, saying that this agreement has resulted in many positive direct and indirect developments mentioning here economic growth, exports growth, higher foreign investments, and budgetary income.

Head of AmCham Economic Research Institute, Visar Hapçiu, said that despite the implementation of SAA in the country, Kosovar exports remain at a lower level compared to European exports in the Kosovar market. He said that the business perception on SAA shows that amongst the main challenges that they face are lack of partnerships with European businesses and the image of Kosovo which is not very good in the eyes of investors. Hapçiu added that businesses are satisfied with the fiscal reforms in the environment of doing business saying that businesses require from institutions to take future steps in providing grants and subventions for them.

Further on, Driton Zairi, Managing Director of Ford Motors Kosova and Member of AmCham Board of Governors, said that signing this agreement has positively affected the car industry in Kosovo mentioning the increasing number of new vehicles import from the start of its implementation. Albulena Veseli from Suhareka Verari said that the wine sector also has easily distributed its products in the European markets which has resulted in higher exports. Whereas Kushtrim Ajvazi from the meat processing company Apetit Group said that amongst the challenges they face in this industry is the lack of recognition of their products’ certificates which is being reflected in very low figures of their products present in European markets.