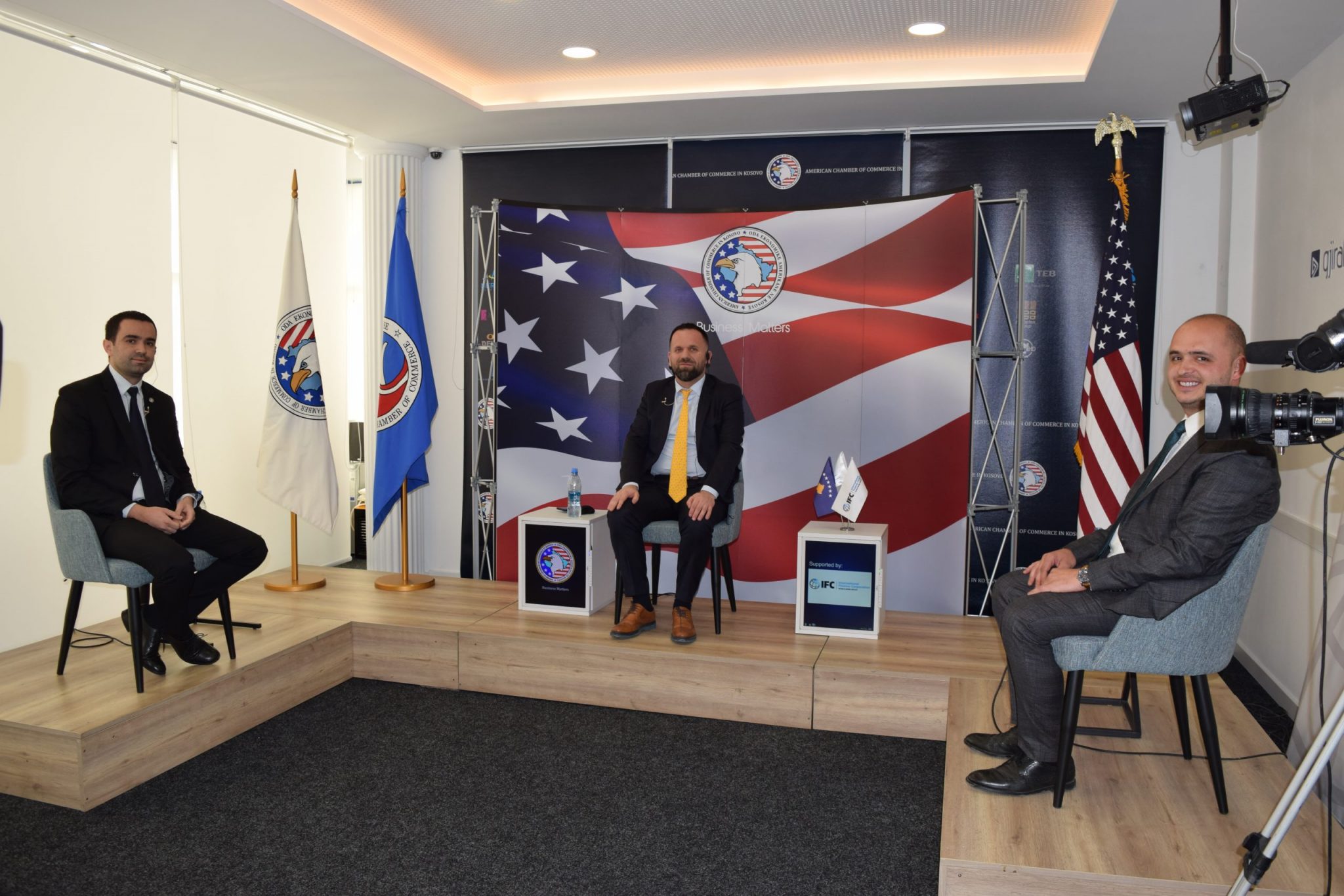 Prishtina, April 29, 2020 – The economic crisis caused by the COVID19 pandemic undermines the operations of many enterprises, a number of which may face the need for restructuring or even bankruptcy. To discuss the legal framework for debt settlement, but also bankruptcy restructuring, the American Chamber of Commerce in Kosovo in cooperation with the International Finance Corporation (IFC) organized a virtual forum with panelists Andres Federiko Martinez, Senior Debt and Bankruptcy Specialist in the International Finance Corporation (IFC) part of the World Bank Group, Ardi Shita, IFC Consultant, Berat Rukiqi, President of the Kosovo Chamber of Commerce, and Petrit Balija, Executive Director of the Kosovo Banking Association

Speaking via video communication from Washington, IFC’s Andres Federico Martinez said that the crisis we are in now, poses a great risk to the survival of businesses and stressed the importance of a genuine strategy to overcome this situation, a strategy which also includes the insolvency system. Martinez said that as a way out of the crisis and minimizing the number of businesses that were on the verge of bankruptcy, insolvency laws have been reformed to make it harder for creditors to speed up the bankruptcy process thus allowing debtors to take advantage of these laws and of the restructuring mechanism as well. He also added that he believes that Kosovo has strong instruments within the bankruptcy law to react to this crisis in order to preserve its main function. He also added that many countries inside and outside the EU have made changes within this law during this period in order to protect companies from liquidation. Martinez further said that the main risk in Kosovo is the liquidation of companies that are functional and necessary for the economy and welfare of the country, emphasizing that we must first encourage extrajudicial negotiations, especially for small and medium enterprises especially since Kosovo has a law on these negotiations. In the end, he encouraged all business owners to consult with their lawyers and use these mechanisms provided by law.

Berat Rukiqi from the Kosovo Chamber of Commerce said that the agenda of business representations aims to minimize the number of businesses with bankruptcy potential and save jobs in Kosovo, adding that among the problems that these companies are facing is the continuous decline of consumption. He mentioned the findings of a survey conducted by five business associations according to which 95% of businesses in Kosovo are affected by the restrictive measures taken by the Government in order to prevent the spread of the virus. He added that 65% of businesses in Kosovo are expressing uncertainty in their future, adding that according to all estimates, the wholesale and retail trade industry has declined and also that without the liquidity of companies, the losses and financial problems that have followed from declining productivity are seen as the main problem caused by pandemics.

Ardi Shita, Consultant at IFC spoke about the framework of the law that regulates the issue of insolvency in Kosovo, saying that at this time it is more current than ever before, also adding that in recent years the legal system, respectively in terms of insolvency has been deficient but since 2016 we have a completely new law which is based on the best European practices. He further added that this law, in the framework of the bankruptcy procedure, offers the possibility of a mandatory reorganization that provides space for the return and development of the debtor, while Kosovo’s law has different mechanisms for small and medium businesses. Shita also spoke about the initiative to create a new bankruptcy law, stressing that reorganization cannot be done so that creditors are offered less return than what they would have earned in the case of liquidation and that it is never intended to harm the creditor. Shita, however, spoke of the general culture that stigmatizes the bankruptcy process, stressing that however, bankruptcy is a normal process that entrepreneurs have to go through, as long as it does not have a deliberate background.

Petrit Balija, from the Kosovo Banking Association, said that in the situation we are in, it is inevitable that some businesses will go bankrupt as a result of the suspension of production or service activities and the reduction of consumption of non-essential products. He added that a considerable number of businesses can now be expected to be able to use debt settlement and business restructuring procedures. Balija also spoke in more detail about the benefit that banks have from the proper implementation of bankruptcy practices or the creation of the new law, saying that banks are giving an extraordinary contribution in order to prevent the insolvency and to support businesses. While interjecting with the current situation Balija said that in the framework of this mechanism is also the program to postpone loans, a program which is being implemented by all members of the Bank Association from which around 45,000 clients have benefited and now the Central Bank has published that a sum of approximately 1.3 billion euros in restructured loans. He also added that that law experts along with judiciary system experts propose that they go for extrajudicial alternatives in the framework of the American Chamber of Commerce and Kosovo Chamber of Commerce.