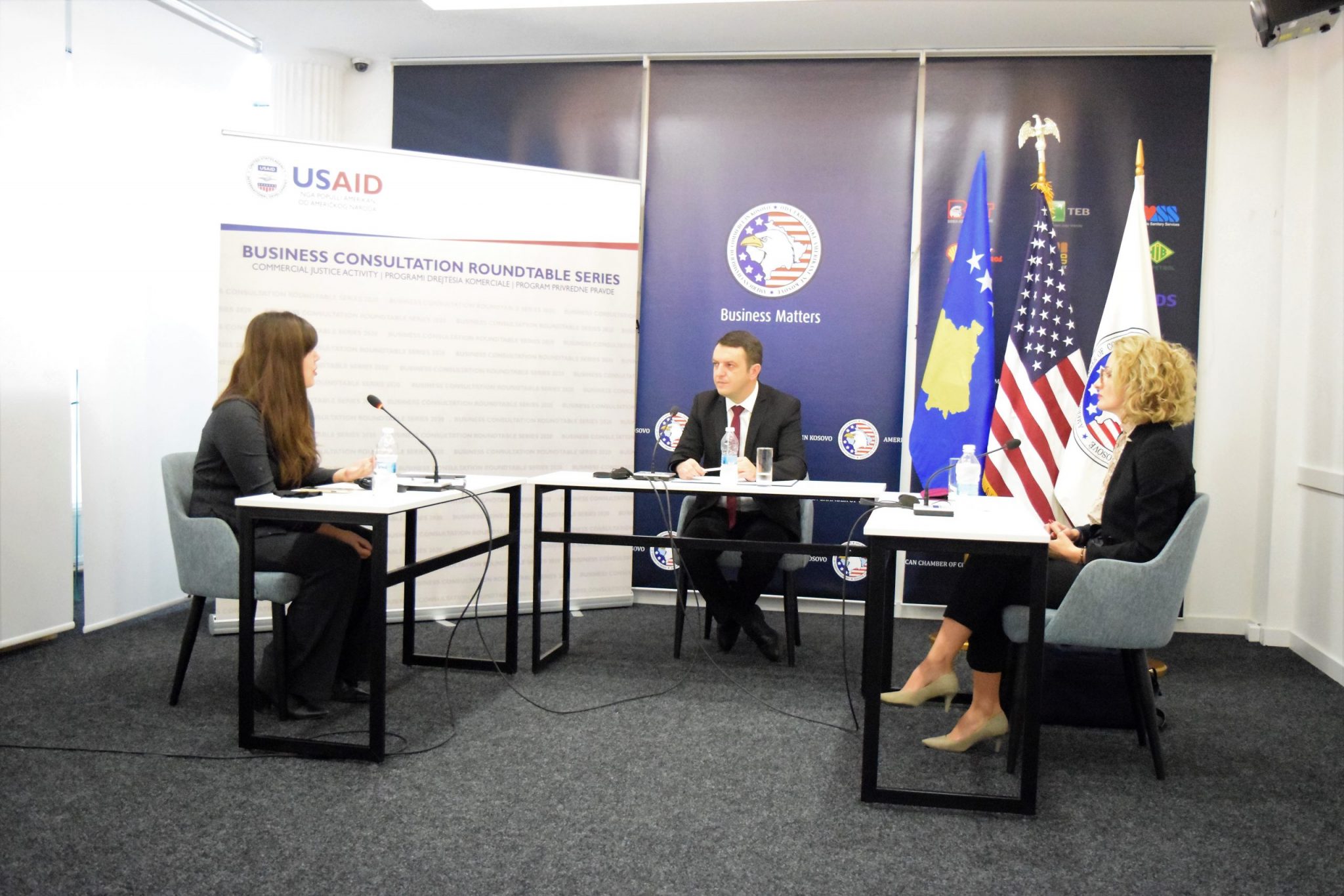 Prishtina, November 13, 2020 – The Commercial Court represents a very important advantage for the field of doing business as it offers the resolution of commercial disputes without prolonging inter-institutional decision-making, a challenge that businesses have been faced with so far. However, another very favorable process for businesses is that of arbitration. This was said during a virtual forum organized  by the American Chamber of Commerce in Kosovo, and the USAID Commercial Justice Activity, with the Minister of Justice of the Republic of Kosovo, Selim Selimi.

The Minister of Justice Selim Selimi, during this discussion, stressed that the Ministry he leads is now in the final stages of preparing the Draft Law on the Commercial Court. He also stressed that the functioning of this Court is creating a new pillar for the justice system in the country, while adding that the articles and chapters that make up this Court, will be enough to release capital and at the same time will make interactions between natural and legal person far more effective in terms of resolving commercial disputes. Elaborating further on the content of the Draft Law, the Minister stressed that the Commercial Court will be the single address for addressing commercial cases, while he also recommended businesses to use arbitration as a fast and effective method for resolving disputes.

Vjosa Shkodra, Deputy Chief of Party, USAID Commercial Justice Activity,  stated that the idea and purpose to establish a Commercial Court has been ongoing within the implementation of the program she represents while adding that it is also foreseen within the framework of the functional review of the rule of law. Referring to the processes carried out towards the establishment of this court, Shkodra mentioned that the rights of businesses are guaranteed by the Constitution of the country while emphasizing that in addition to the legal space for dealing with certain issues, the execution of decisions or their reversal in enforcement procedures when businesses are in the process of a dispute. Further, she added that a larger number of judges has been requested for the Commercial Court, which could help to address one of the main issues the judicial system has encountered so far.

Jason Emert, the arbitrator at AmCham’s Arbitration Center said that arbitration and the Commercial Court go hand in hand while also emphasizing the advantages that arbitration brings in resolving commercial disputes. Referring to the implementation of arbitration in the United States, Emert stated that there has been a positive trend in the use of this method, and while relating to the activity taking place in Kosovo for the establishment of the Commercial Court, he described it as very important for the activity and field of doing business in the country.