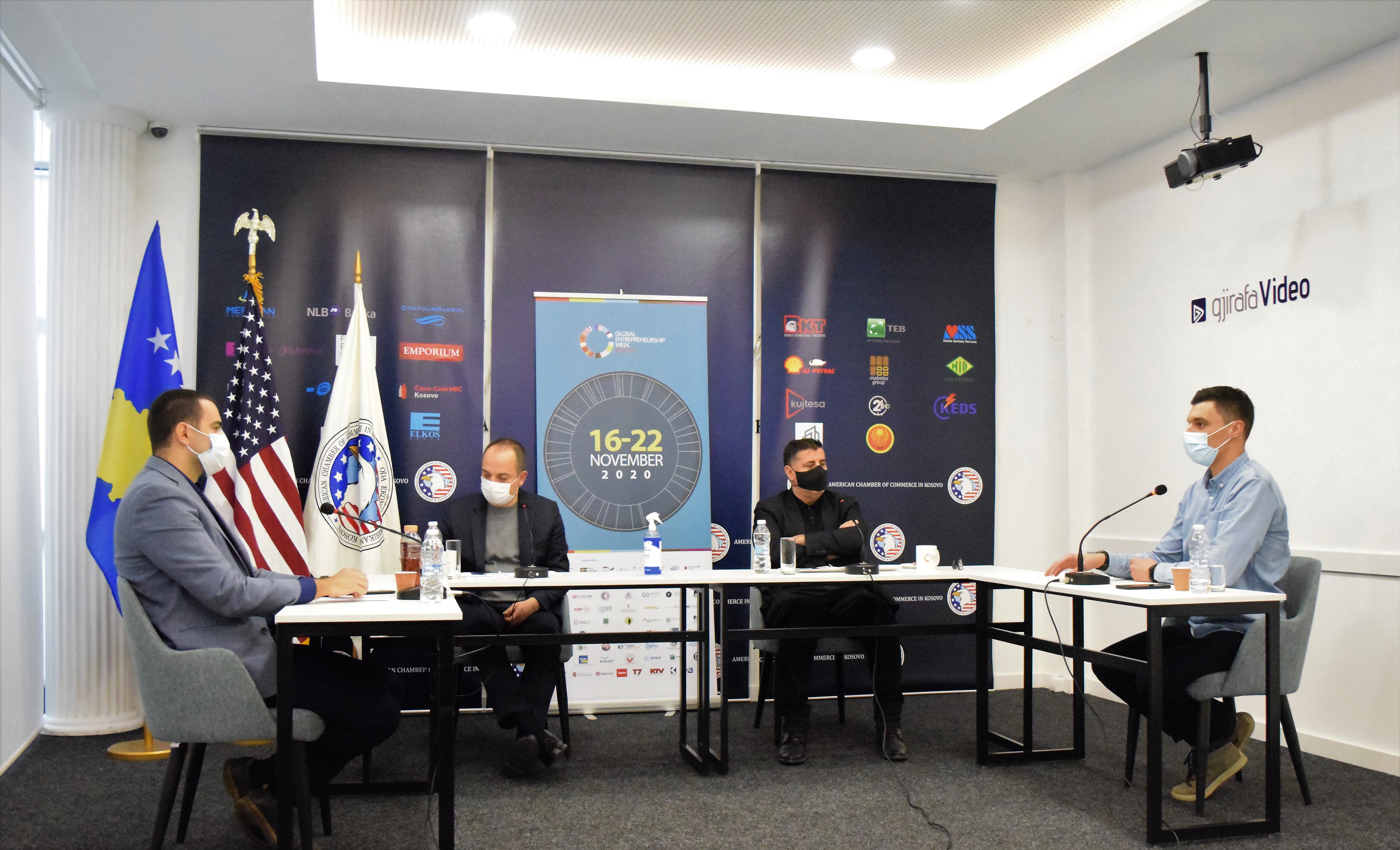 Prishtina, November 22, 2020 – The activities of the American Chamber of Commerce in Kosovo for the Global Entrepreneurship Week organized under the leadership of the Innovation Centre Kosovo, were concluded by discussing the role of municipalities in the development of the entrepreneurial ecosystem.

AmCham Executive Director, Arian Zeka, stated that municipalities play an important role in developing the entrepreneurship ecosystem and entrepreneurial policies, emphasizing the removal of barriers in doing business at a local level, serving as advocates for local businesses at central institutions, but also through the allocation of funds to promote entrepreneurship, which among other things would serve as a motivator for the youth to stay in Kosovo. He also spoke about the valuable role of the Innovation Centre (ICK) in supporting young entrepreneurs, emphasizing that the activities of this organization have caused positive echoes around the world.

The Mayor of Prizren, Mytaher Haskuka, stated that in order to ensure  economic development at a local level, within this municipality areas  which provide Prizren a strategic advantage such as tourism, manufacturing, agriculture and creative services have been identified. Furthermore, he spoke about the importance of the Innovation and Training Park in Prizren, as well as the potential that this area has in promoting youth entrepreneurship as well as investments in general. Mayor Haskuka also spoke about the functionalization of the ‘one-stop-shop’ service center, in order to facilitate doing business. While talking about human capital, Haskuka advised the youth to develop professional skills according to market needs.

The Mayor of Gjilan, Lutfi Haziri, mentioned the municipalities’ strategic plan for socio-economic development, which focuses on entrepreneurship and increasing the employment of women. He also spoke about the structure and development of businesses in this municipality, emphasizing the ‘zero tariff’ policy through which all taxes except the property tax have been reduced, thus creating a great alleviation for the activities of local businesses. Mayor Haziri stressed that during and after the pandemic, the youth of Gjilan will be supported in sectors such as technology and handicrafts, while adding that work is being done on reactivating the business incubator and developing economic zones within this municipality. Haziri said that Gjilan is in the process towards eliminating bureaucratic administrative procedures, while according to him, it is important to increase the attractiveness of the country for young people, and create opportunities and facilities for investments in Kosovo.

Shpend Lila, Training, Public Relations and Events Manager at the Innovation Centre Kosovo (ICK), placed special emphasis on the need to create recreational, multifunctional spaces accessible to the general public for the development of activities of an entrepreneurial and innovative nature. Lila also expressed concern about the closure of the Ministry of Innovation, which would serve as a single address for the development of enterprises and startup businesses, while in order to ensure proper economic development and promotion of sectors with potential, he recommended the creation of specific incubators according to the profiles of the municipalities, in order to decentralize the focus in the capital and make the development equal.

The American Chamber of Commerce in Kosovo marked the Global Entrepreneurship Week with a total of 16 virtual activities attended by about 50 panelists and an audience of approximately 40,000 people, while topics of discussion included education, inclusion, policies and the entrepreneurial ecosystem. A number of activities were organized in partnership with the U.S. Embassy, the United States Agency for International Development (USAID), the Agency for Regional Development – Center (RDAC), and AAB College.