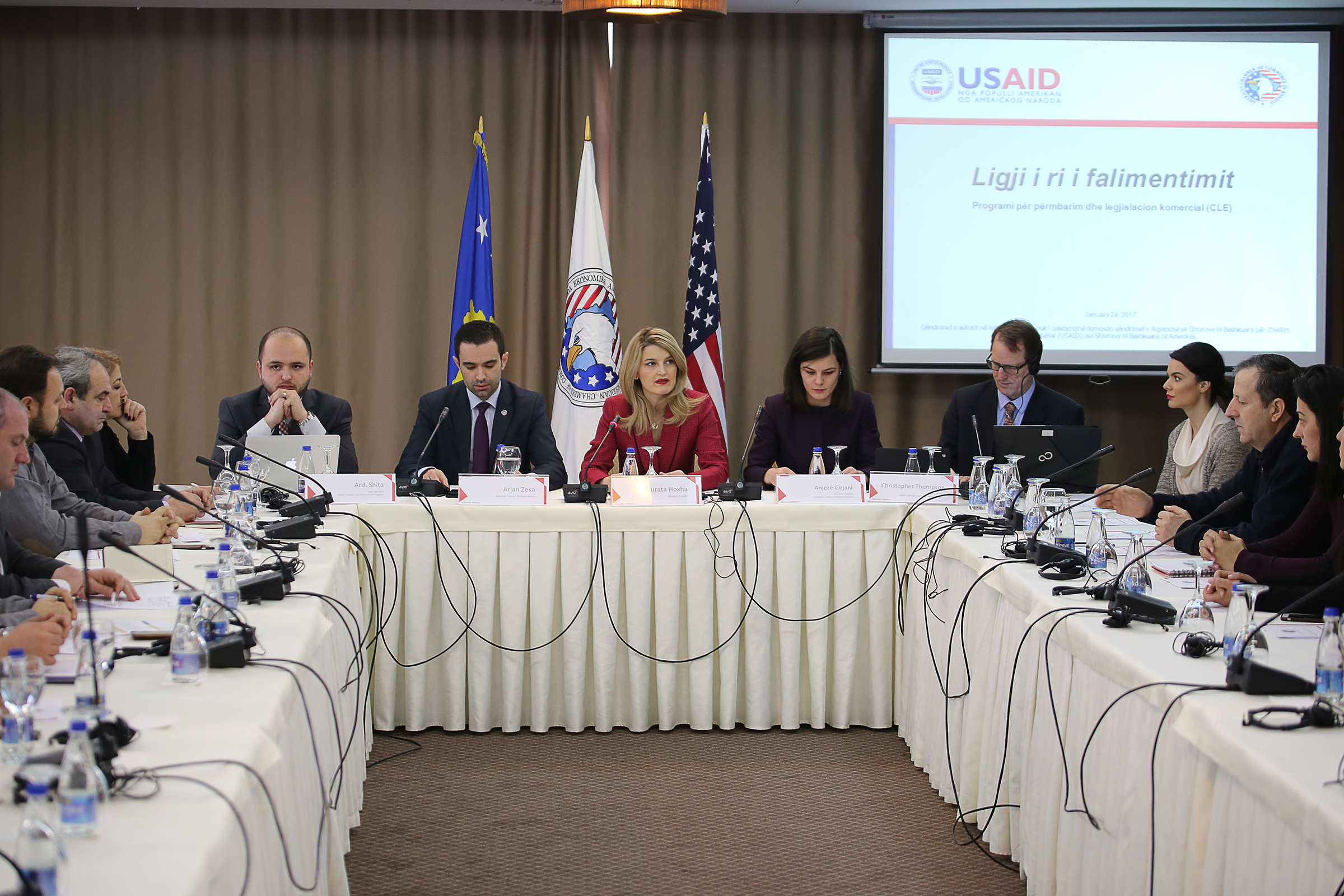 Prishtina, January 24, 2016 – New Law on Bankruptcy is considered key to functioning of business activities in the market economy and economic development, in general. Intended to provide information on the procedure of bankruptcy and on the importance of this law, the American Chamber of Commerce in Kosovo organized an event with Minister of Justice Dhurata Hoxha and USAID Contract Law Enforcement Program.

AmCham Executive Director Arian Zeka said that AmCham positively assesses the new Law on Bankruptcy, which according to him establishes a contemporary system for bankruptcy procedures, a practice which couldn’t be applied in the past due to lack of legal provisions. Zeka pointed out that this law has been welcomed for the fact of it regulating the aspect of business bankruptcy with different legal statuses for business registrations, thus establishing a better legal protection for potential business creditors, which could face the need to undertake bankruptcy procedure. Furthermore, in addition to businesses using the new bankruptcy legal framework, Zeka emphasized that it is necessary for courts to accurately enforce provisions of the new law, thus enhancing trust of domestic and foreign investors.

Minister Hoxha praised AmCham’s initiative to address issues of importance for well-functioning of businesses, rule of law and economic development, considering that justice system continues to face challenges, among which, large number of backloads remains critical for the entire justice system. Hoxha considered that rule of law needs to be tackled on the basis of transparency, accountability and responsibility, considering that rule of law and drafting of legal policies are pre conditions to protection and development of businesses, citizens’ interests and, as a result, sustainable economic development in the country. According to Hoxha, the entrance into force of the Law on Bankruptcy will establish a legal framework which will enable businesses access to structured procedures towards the process of bankruptcy. Minister Hoxha said that this ministry will prioritize addressing issues through commercial legislation to contribute towards this direction.

Christopher Thompson, Chief of Party of USAID Contract Law Enforcement Program thoroughly presented the actual legal framework on bankruptcy and the bankruptcy procedure. Thompson said that this law is of crucial importance, particularly to economic development and rule of law, without which businesses cannot operate. This law, according to Thompson provides a sustainable framework for businesses that have to undergo bankruptcy proceedings, a process which can be addresses to the Basic Court in Prishtina, in the Legal Affairs Department.

On the other hand, Ardi Shita Legal Specialist of USAID Contract Law Enforcement Program and Secretary General of AmCham Board of Governors pointed out that the old Law on Bankruptcy has been characterized with shortfalls from the year of entrance into force, due to its tackling a small number of domestic companies. Whereas, New Law on bankruptcy, according to Shita ensures legal provisions to enforce bankruptcy proceedings, thus adding that USAID has been engaged in drafting an instructive document to facilitate such a process.