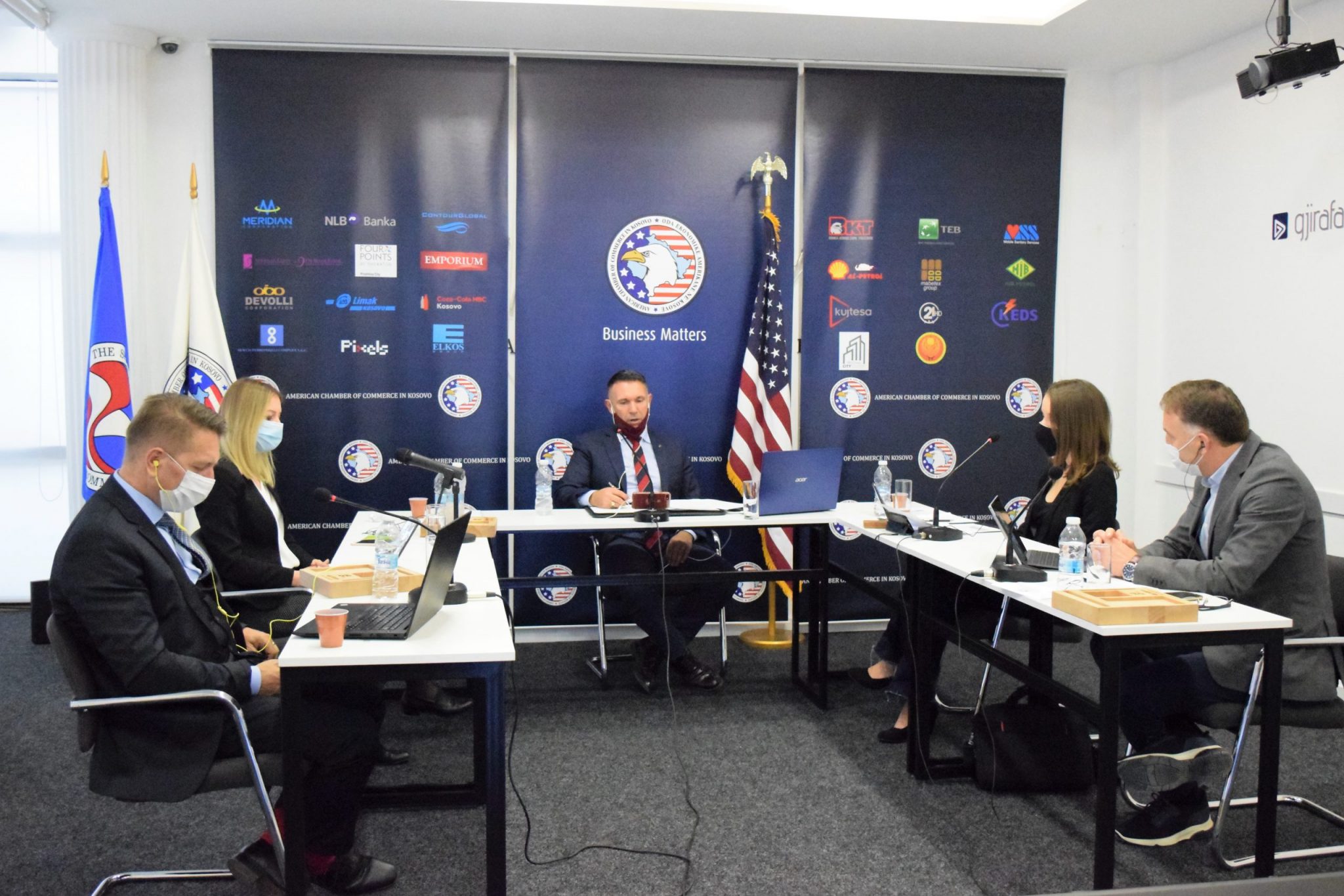 Prishtina, November 2, 2020 – The digital advancement accelerated by the COVID-19 pandemic has brought various benefits to society, however, it has also paved the way for invisible cyber risks. During a virtual forum organized by the American Chamber of Commerce in Kosovo, along with a panel of local and foreign experts, the new cybersecurity era, support for small and medium enterprises regarding cybersecurity as well as the importance of international cooperation were some of the points of discussion.

Xhavit Gashi, External Advisor to AmCham as well as moderator of the event, stated that the global situation caused by the COVID-19 pandemic has further increased the importance of cybersecurity, as well as the number of risks deriving from it.

General Timothy Orr, Former Director of Iowa Public Defense, stated that the United States extensively uses the Public-Private partnership in order to protect critical infrastructure as well as drive the overall cyber strategy. According to him, every government must have a cyber strategy, which serves as a framework for sharing information regarding the cyber threats opposed to both the public and the private sector.

Doug Jacobson, Professor, and Director of the Information Assurance Center at Iowa State University stated that special attention in this country is given to educating society about cybersecurity. According to Jacobson, during this period of increased digitalization, many scamming practices have been present, such as phishing emails aiming to discover personal information, which have mainly targeted individuals.

Lajos Antal, Head of Cyber-Risk Services in Central Europe within Deloitte, stated that the cyber-attacks which have been growing globally, do not only damage companies financially, they also damage relations with partners, trusted vendors, and other stakeholders. According to him, cyber-security requires investments, but it is inevitable as it plays an imperative role in protection against attacks that target businesses.

Kujtim Gashi, General Director of Information Society Agency, stressed that this period has created a good opportunity to synchronize activities between the private and public sectors regarding cyber-security. According to him, it is important to note that during the last years, capacities for cyber-security have increased regarding critical infrastructure and that thus far, cyber-attacks have been successfully defused.

Xhanan Karaqa, Head of Security at NLB Bank, emphasized that small and medium enterprises have also faced cyber-attacks which are present worldwide, while highlighting the importance of raising awareness among these enterprises regarding cyber risks, in order for them to be able to better defend their networks and data.

Rina Basholli, Advanced Technology Security Engineer, emphasized that with the advancement accelerated by the pandemic, opportunities for cyber-attacks that can affect various security vectors have increased as well. According to her, lack of awareness about cyber-security remains a challenge, whereas it is necessary for companies and organizations to be pro-active and prepared in this regard.

Mentor Hoxhaj, President of Cyber Security and Privacy, said that one of the key issues concerning cyber-security is the lack of reporting data breaches as well as the lack of investments in cyberinfrastructure. Hoxhaj also highlighted the need to create a standard for reporting such issues as well as increasing transparency so as to build better defense systems.