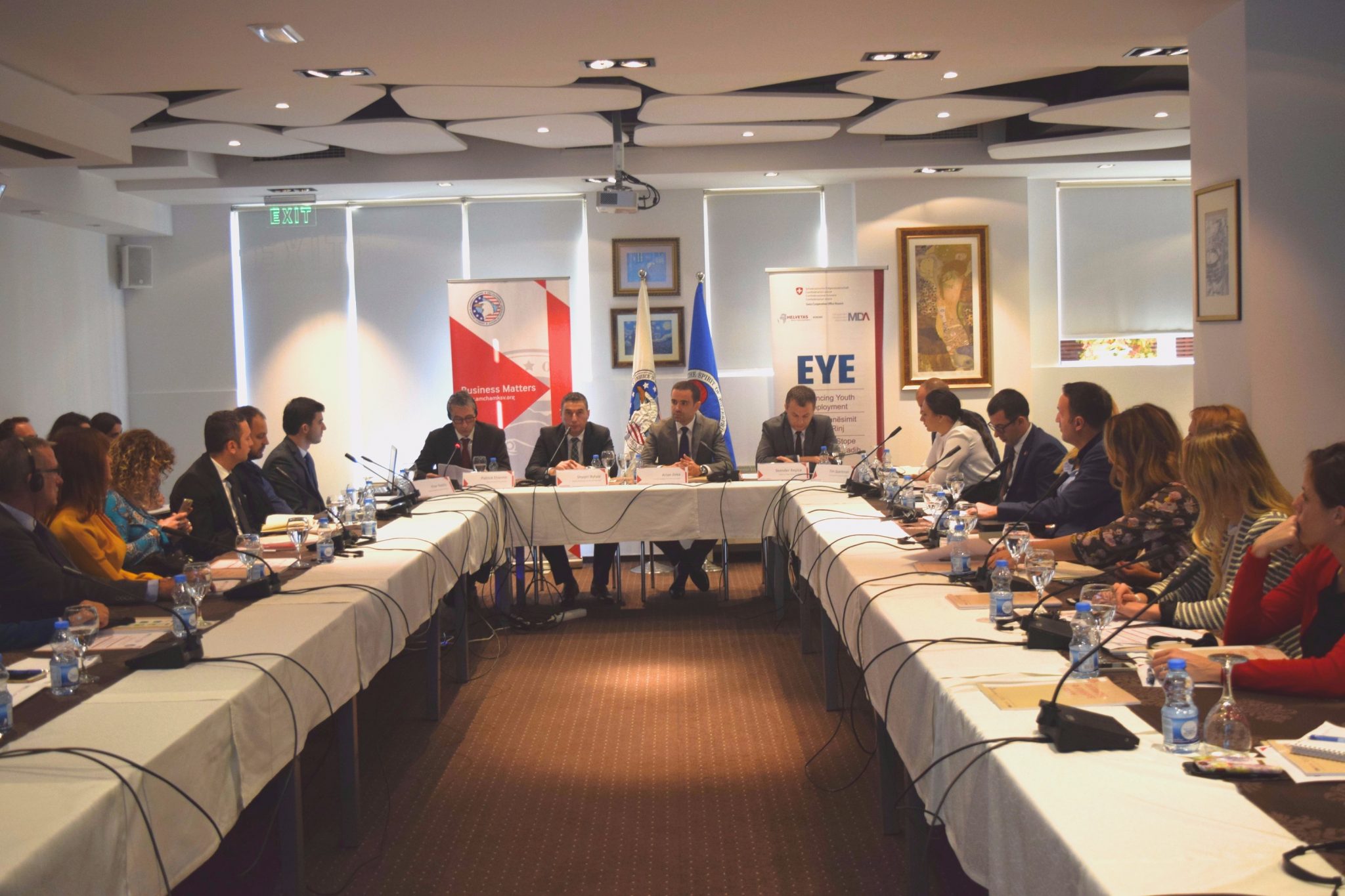 Prishtina, October 11, 2017 – Creating a better linkage and communication between the education sector and the private sector should be the main priority while drafting reforms in the education sector in the country, with the purpose of reducing the existing skills gap in Kosovo. This was the main message of a roundtable organized by the American Chamber of Commerce in Kosovo in cooperation with the Enhancing Youth Employment project, whereby the main findings of a study conducted on this topic were presented.
Arian Zeka, AmCham Executive Director, pointed out that finding qualified personnel for certain profiles has been identified as a serious problem for many companies in the private sector, which directly affects their competitiveness. This challenge that businesses face has outlined the need to conduct a skills gap analysis with the purpose of identifying those skills which are greatly needed in the private sector, and also compiling recommendations which could help in improving the dialogue between education institutions and businesses.
Patrick Etienne, Director of Swiss Development and Cooperation Agency in Kosovo, expressed his satisfaction on the study conducted, and emphasized that the findings of the study should be considered as indicators for addressing the challenges which the private sector faces in terms of labor force. He called on relevant ministries to act upon the main recommendations of the study, while pointing out the need to give a greater importance to vocational education as a career choice, as opposed to promoting academic tracks.
In presenting the main findings of the study, Visar Hapçiu, AmCham Policy Manager, explained that the research includes a survey with 200 companies in 7 regions of Kosovo, focusing in 3 key sectors, namely manufacturing, trade, and services. Based on this study, the largest skills gap have been reported in manufacturing and services sectors, particularly in technical profiles which are usually taught in vocational education schools. Furthermore, the study shows lack of continuous communication between education institutions and the private sector, which has created a situation where the curricula of education institutions are not in accordance with the businesses’ demand on skilled labor force.
Minister of Education, Science, and Technology, Shyqiri Bytyqi, said that these findings will be helpful for the ministry when drafting plans or reforms for the education sector. He explained that vocational education will be the ministry’s main priority in the upcoming years, given the fact that reforms in this tier of the education system have been identified as a crucial factor in creating a workforce in accordance with private sector needs. Bytyqi also mentioned some of the main challenges that vocational schools face, including financial difficulties, and also urged businesses to increase their cooperation and communication with these institutions.
Skender Reçica, Minister of Labor and Social Welfare, presented the ministry’s plans in this field, while emphasizing that their main goal is that through better vocational preparation and increased employability of the labor force, to have less families dependent on social assistance in Kosovo. Reçica promised that the ministry will create working groups to analyze findings of the study and see how they could be reflected in upcoming vocational education policies. He also discussed on the work of vocational trainings centers operating within the Employment Agency, while emphasizing the potential they have in workforce preparation.
The conference continued with further discussions between businesses, education institutions, and various local and international organizations, where the main agreement was that the education system reform based on the needs of the private sector is very important for long-term economic development in Kosovo.