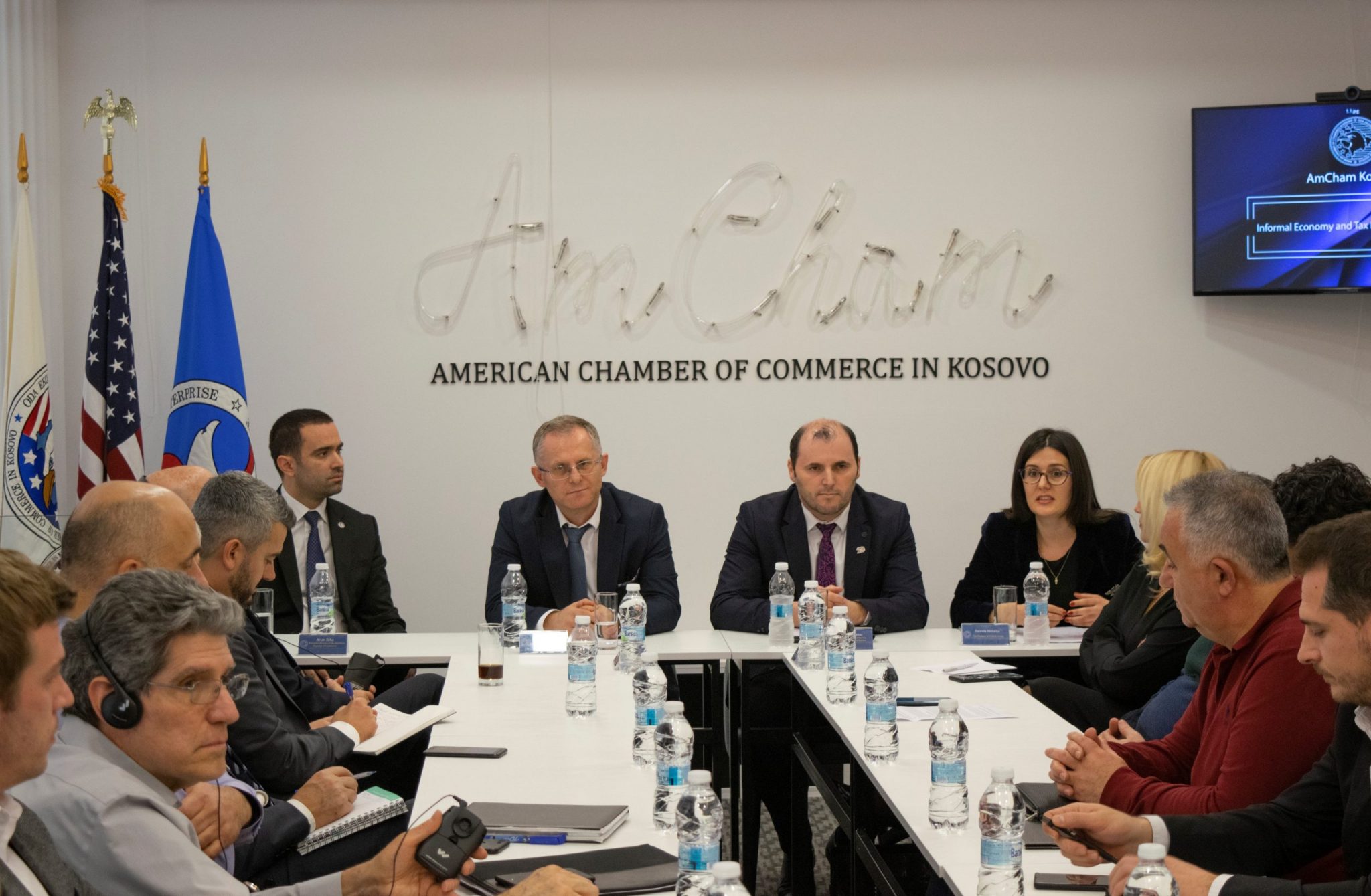 Prishtina, February 13, 2020 –  Public institutions need to strengthen partnerships with the business community in order to fight the informal economy and tax evasion, with the aim of creating an equal and better business environment in the country. This was concluded during a roundtable organized by the American Chamber of Commerce in Kosovo and the company Ernst&Young, where business representatives had the opportunity to discuss about unfair economic practices with the Minister of Finance and TAK General Director.

The Executive Director of the American Chamber of Commerce in Kosovo, Arian Zeka, during this meeting highlighted that the government should support the Tax Administration of Kosovo in strengthening inspection capacities, by ensuring that all businesses declare their taxes properly. He also talked about the importance of fighting informal economy, noting that even in AmCham’s Growth Roadmap document for the new government, the American Chamber has included fighting informal economy as one of the top priorities on the agenda of the new government. Whereas, Dairida Metalia, Tax Manager at Ernst&Young, stated that the presence of the informal economy in various areas of economic acivity, which according to statistics reaches over 30% of GDP, is one of the major challenges that Kosovo faces.

The Minister of Finance and Transfers, Besnik Bislimi, emphasized that the key partners of public institutions in fighting the informal economy are the business community and consumers. According to him, the public sector has given quite a contribution in the growth of this type of economy, considering the ministry which he now leads as one of the most responsible actors. The Minister said that informal economy is fueled by insufficient efforts to ensure formalization of the economy, while the first step that guarantees success in combating it is the acceptance of past failure, and the increased intensity of reporting efforts in TAK. Bislimi considered that the measurement of the volume of informal economy is a problem in itself, where he mentioned that it is a wrong approach to label only some relatively fragile sectors, because informality is harmful independent of the sector that it occurs in.

The General Director of the Tax Administration of Kosovo, Ilir Murtezaj, said that there is already a tradition of developing cooperation between the institution he represents and the business community, which is definitely bringing positive change. Murtezaj added that during the 20 years of TAK’s functioning as an institution, but also of business development, he considers that there is a significant advancement on both sides. From the business side this can be seen because of the increased confidence in TAK by declaring and paying their tax obligations, while from TAK’s side by the improvement of its staff, which in comparison with a poorly professionalized past, is progressively evolving and raising awareness. According to him, the presence of such a large tax gap is unacceptable for TAK as an institution, despite being at a better level than some countries in the region. Murtezaj emphasized that the Tax Administration of Kosovo has the legal responsibility to reduce the level of tax evasion to a minimum, and they aim to find the key to this problem in close cooperation with businesses.

During the open discussion with businesses, the need to promote electronic transactions instead of cash transactions and its supporting with adequate legal infrastructure was also mentioned among other things.