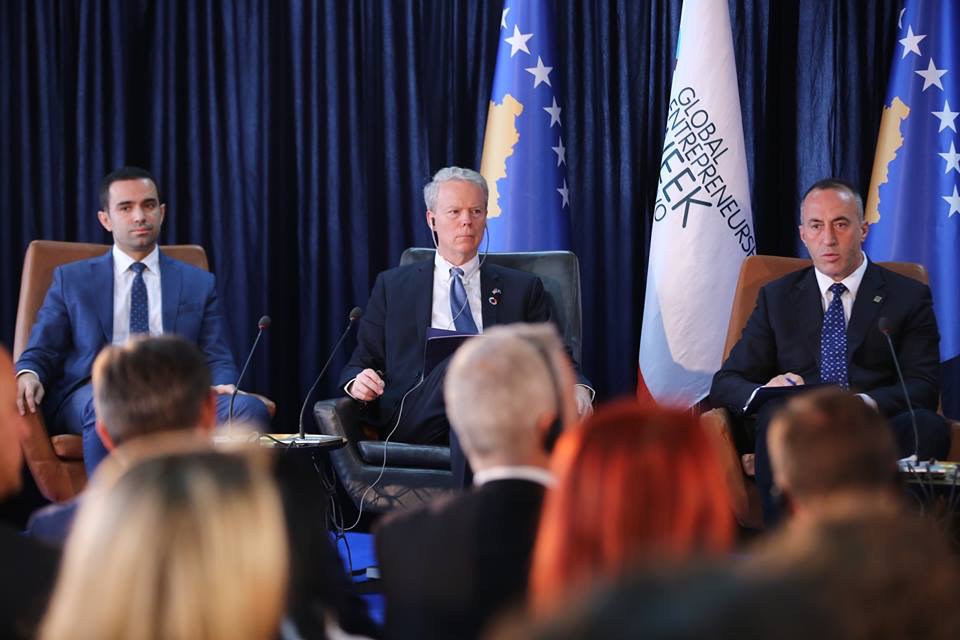 Prishtina, November 13, 2017 – Under the leadership of Innovation Center Kosovo (ICK), in cooperation with the American Chamber of Commerce in Kosovo, the Global Entrepreneurship Week began, where 40 partner organizations and donors from Kosovo for the 5thconsecutive year join the same initiatives around the world, in order to raise awareness of the importance of entrepreneurship in economic development in the country.

In the opening of the event “Global Entrepreneurship Week 2017”, prime minister of Kosovo, Ramush Haradinaj, emphasized the importance of entrepreneurship and individuals who are following the global trends in this direction and are helping the country to reach the highest levels with other countries in this direction. For this, the prime minister thanked the Innovation Centre of Kosovo, which saves the primate in the country and has created new spaces for new entrepreneurs in order to perform their innovative ideas. While mentioning the importance of partnership for those who made the first steps in entrepreneurship, Haradinaj said that the Government will be close in their development, rejoicing over the fact that the roundtable is organized under the umbrella of the Government.

On this occasion, US Ambassador in Kosovo, Greg Delawie, said that it is important for every citizen to be an example in how they help the state to create more prosperity in the country. During his speech, Delawie also expressed the positive comments regarding Kosovo’s ranking in the 40th  place in World Bank’s Report on Doing Business, but stressed that it is not the rank that matters but what should concern us most is improving the way of life for Kosovo’s citizens.

Director of the Innovation Center of Kosovo, Uranik Begu, said that through these activities a great alliance has been created in strengthening entrepreneurship in the country. He stressed that the Global Entrepreneurship Week this year has a record number of partners, around 40, which during the week will organize activities that will inspire youth about entrepreneurship. Begu said that this gathering has happened in order to give entrepreneurship strong institutional support in the country and that this enthusiasm must be concrete with new innovative enterprises that will be the bearers of economic development.

“We as a community have an obligation that this entrepreneurship ecosystem that we are building together, to develop it through principles of professional independence and sincere cooperation, by helping and inspiring in particular the youth who aim on self-employment and development of innovative enterprises as a prerequisite of economic development and welfare improvement in the country, ” concluded Begu.

Whereas, the executive director of the American Chamber, Arian Zeka, said that the activities that take place this week are very important. He stressed that the priority is to work on creating new jobs and improving the country’s trade balance. Further on, Zeka said that the role of the government is irreplaceable in undertaking measures in coordinating activities which increase the quality of education and on creating an economic environment that these startups businesses have the chance to grow and to develop. Also he said that the role of the government is very important in order to grant and secure the freedom of movement for the youth in order to generate ideas.

The Forum for Entrepreneurship Ecosystem was closed with two panel sessions: Ecosystem improvement and Access to Finance, attended by Minister for Innovation and Entrepreneurship, Besim Beqaj, representatives from the private banking sector, EBRD, Recura Financials, USAID, Cacttus and startup businesses from the ICK incubator. It is worth mentioning that during this forum Minister Beqaj announced that the budget for innovation and entrepreneurship in 2018 will be 10 million euros, of which over 9.5 million euros will be in capital investments, among other functions of the four innovation centers and business incubators in Prishtina, Mitrovica, Prizren and Peja.

The Global Entrepreneurship Week in Kosovo continues until Sunday and concludes with the well-known Global “Startup Weekend” competition at Innovation Center of Kosovo.